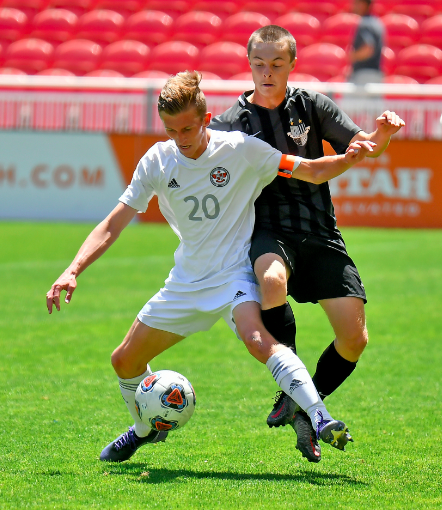 Skyridge senior midfielder Austin Wallace was named “Mr. Soccer” by the Deseret News on June 18 after leading his team to a runner-up finish in the state 6A tournament.

The speedster led the 6A ranks with 55 offensive points from 22 goals and 11 assists, finishing second in all of those categories on the all-classification list. He averaged better than one goal and half an assist per game and scored in all but three of his team’s 18 matches this season.

“He just has a nose for the net,” said Falcon Coach Jerry Priesendorf. “Austin scores and everybody knew that. His teammates always kept an eye on where he was.” His coach called him a consummate competitor. It showed in the classroom too, where he earned a cumulative 4.0 GPA.

Wallace was one of the team’s captains; the other, senior midfielder Ian Nielsen, made a fine science of getting Wallace the ball. He provided a sizeable chunk of the assists on Wallace’s goals, about a quarter of which came on headers.

“He looked for him in almost all set pieces, he looked at him on give and go’s,” Priesendorf said. “He looked for Austin because he knew what could happen. The two of them made a great team.”

That smooth chemistry should continue in the future too; both have committed to play at Dixie State University following service as missionaries for the Church of Jesus Christ of Latter-day Saints.