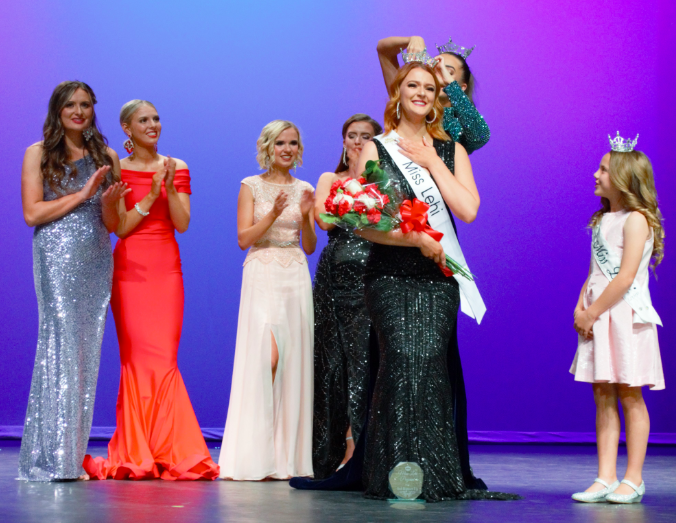 Lehi City kicked off Round-Up week by crowning Miss Lehi 2021, Hannah Norton, on Saturday, June 19, at Lehi High School. “I’m so excited to serve and represent the city of Lehi,” said Norton. “I’ve been competing in the Miss America Organization for almost ten years, and I can’t believe I finally get to live my dream!”

Norton will receive a $4,000 scholarship and a $3,000 stipend to compete in the Miss Utah Competition in June 2022. Her Social Impact Initiative focuses on raising awareness of suicide and its prevention. The judges asked each candidate a difficult question related to her social impact initiative live on stage during the program. A judge asked Norton if the police should focus more time and money on mental health training. “The Lehi Police Department has implemented more mental health training than other cities and I couldn’t be more proud of the work they’re doing,” answered Norton. She was ready with sobering mental health and suicide statistics and reminded the audience, “You are not alone.”

The Miss Lehi Competition began with talent performances from each of the seven candidates starting with Alaina Fuller on the violin. Fuller, in her first Miss Lehi competition, won First Runner-up and a $2,000 scholarship, as well as the Talent and Red-Carpet awards, worth $200 each.

Annabella Pizzuto won Second Runner Up and a $1,500 scholarship. Pizzuto explained during the On-Stage Question that she is a first-generation college student. “Education is the route to a better life. That doesn’t always mean a traditional four-year college and there are opportunities for education right here in Lehi,” she said.

The Miss Lehi Competition added a new scholarship in honor of Alyssa Eav, Honorary Miss Lehi 2019. Eav passed away on July 26, 2020, at just 17 years old. The first “Kindness Like Alyssa” scholarship of $250 went to Sierra Somerville.

Shelby Barnes’ name was announced several times during the achievement awards. Barnes sold the most tickets to Miss Lehi, earned the most sponsorships, earned third place award for her community service platform, and took home the Spirit of Miss Lehi, an award voted on by other candidates, also known as Miss Congeniality.

Master of Ceremonies Johnny Revill delighted the audience with “dad” jokes he borrowed from the Miss Lehi candidates and two musical numbers that inspired spontaneous phone flashlight accompaniment from the crowd. Miss Lehi 2019-2020 Lindsey Larsen performed her Miss Utah ballet piece and joined Revill onstage introducing each part of the competition. Larsen took a final walk around the stage as her previously recorded voice advised the next Miss Lehi, “Soak up every moment because one year, or even two, goes by so quickly. It’s not about the fancy dresses or the sparkly hat, it’s about the people you come in contact with and how you can make an impact.”