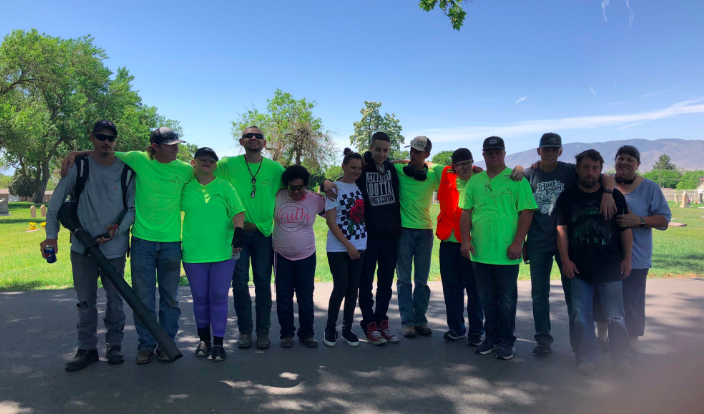 Memorial Day in Lehi has always been when families gather around grave plots and renew relationships, reminisce about relatives and friends and reconnect with their heritage. This year, several Lehi citizens asked the Lehi Free Press to express their gratitude for the cemetery’s beauty. Enthusiasm for the hard work of city employees to maintain and preserve this special spot was expressed by many who visited the cemetery this year.

Former Lehi Mayor Kenneth Greenwood remembered when the cemetery was the “ugly stepchild of the City,” Years ago, no one was personally responsible for the cemetery’s upkeep, and it was a job no one seemingly wanted until Tim Monson was appointed sexton. So, Monson and a handful of employees began the daunting job of improving the existing cemetery. “The lawns were mowed and roads re-paved and fences repaired and replaced,” said Greenwood.

Carl Buhler, who had been hired to work for the Parks Department, formed a friendship with Monson, and together they were “a match made in heaven,” according to Greenwood. The duo worked side by side tirelessly to improve the cemetery.

Buhler almost single-handedly installed the sprinkling system, and on many Saturdays, Buhler and his family would go to the cemetery to pull weeds and groom the plots. Much of the work was done without compensation, according to Greenwood.

In 2001, the cemetery was expanded. Additional land was acquired on the north side of the road leading into the cemetery. Originally the land was owned by the Christofferson family, and with the death of Christofferson, the former chicken and egg-producing operation was listed for sale. City officials and the Christofferson family negotiated for the sale of the property. Finally, a deal was made, and the City became owners of the roughly five-acre plot, which has become a beautiful area that houses the office of the sexton and other city employees. This area also accommodates the “baby’s cemetery.” A bronze sculpture of a grieving family is surrounded by graves of those taken way too soon. The grassy hillside will become the peaceful resting place for many more in years to come.

Lehi’s reverence for those who have passed began in the early days of Lehi’s founding. A small cemetery located on State Street and east of Dry Creek was the first burial spot for over 100 Lehi residents. Unfortunately, the spot was unkempt and forgotten for many years. Then, in the 50s, former business owners Denzil Turner, who owned Den’s Tire Shop, and Bud Nielson, who owned Bud’s Taxidermy, were excavating on the property when remains were discovered.  Several years later, Don Harris opened Don’s Car Care on the same property and found other human remains. The remains were identified and re-interred at the present cemetery site.

The Daughters of Utah Pioneers arranged for the placement of a marker designating the first cemetery in Lehi. The large stone and bronze marker is visible to anyone driving or walking along the Dry Creek trail. Additionally, the DUP was responsible for creating the roadside park where the monument is now on display.

Shawn Winters is the current sexton of the Lehi cemetery. The City is fortunate to have the services of a crew of seasonal workers called the Danville kids (a group of disabled workers), who spend several days each week during the summer keeping the cemetery in pristine condition. Lehi City employee Grant Whitehead supervises the work. Penny Glather teaches and supervises The Danville Kids.

Whitehead said, “I think we have the best-kept cemetery in the county. I am proud of what we do.”