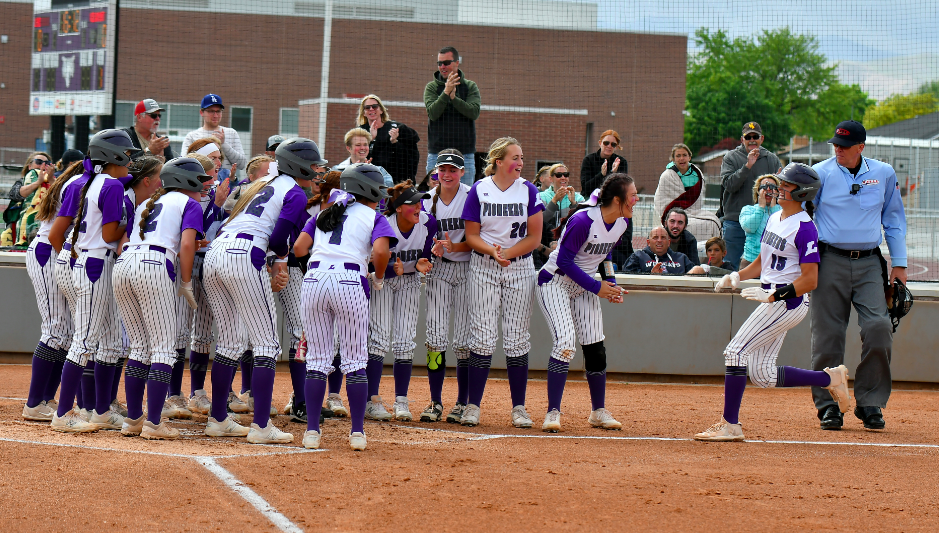 The Lehi softball team ended up ranked #7 entering the 5A state tournament, which gave them a bye in the first two rounds. They easily defeated Timpanogos in two games to advance to the championship bracket but then lost back-to-back contests to complete their run.

The final score for this game is deceptive. The teams were tied at two apiece going into the bottom of the fifth inning, when the Pioneers rode a nine-run turn to victory.

Senior center fielder Ellie Cram had a good outing at the plate, going 3-for-3 with a double, two runs scored and two RBI. Junior Maci Wall had a pair of hits including a home run and scored twice along with driving in three runs.

The Pioneers didn’t leave anything to chance in the second game of the best-of-3 series. They jumped on the Timberwolves for eight runs in the bottom of the first inning and never looked back.

Wall had a grand slam home run to boost the attack. Freshman outfielder Madison Salisbury had a triple and a homer, scored twice and drove in three runs. Takahashi had a pair of hits and scored twice.

In this thrilling back-and-forth contest, the Pioneers were leading 8-7 going into the bottom of the seventh inning, but they couldn’t hold off the #2 Sentinels, who scored two runs to win it. It was the second straight one-run loss to the Region 7 champions, who ended up claiming the silver trophy.

Heaton went 4-for-4 including a home run, scored twice and had three RBI. Takahashi also went 4-for-4 with a double, made three runs and added an RBI. Senior Myia Ockey had a pair of hits including a double and registered two RBI.

The #6 Phoenix were up by six runs after their third turn and never allowed the Pioneers to get more than one run per inning on the way to a comfortable victory. Heaton scored twice and drove in two runs as the game’s offensive leader for Lehi.

Takahashi hit .543 for the season and had the most hits with 63, including 13 doubles, a triple and 25 RBI. She was also the team leader in runs scored with 47 and stole the most bases with 16.