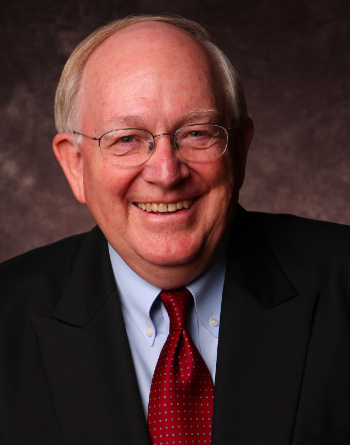 Brent D. Peterson, Ph.D., was raised in a two-story home on First East in Lehi. He attended Lehi Jr. High School and was in the first class to graduate from the “new” Lehi High School in 1960.

Peterson, a standout student, was the quarterback on the football team, a guard on the basketball team, and Senior Class President. He enlisted in the United States National Guard right after graduation and spent two months at Fort Ord, California and four months training at Fort Belvoir in Virginia. Then, he was encouraged to go on a mission and was called to Denmark. When he received his call, his high school counselor, Norine Fox, was elated when he was called to serve where his immigrant ancestors originated. At that time, foreign missions were 2 ½ years.

Peterson then enrolled at BYU. He decided to follow in the footsteps of his father, Dan W. Peterson, a former superintendent of Alpine School District, and major in English and speech. He graduated in four years and wasn’t sure what was next.

“What am I going to do now?” he thought. He was a student-teacher at Payson High School and was offered a position, but he decided to pursue a master’s degree in organizational communication. His master’s thesis research focused on liberal speakers and their influence at BYU. He explained that he used a speech by Robert F. (Bobby) Kennedy as the springboard for his focus. “Having Kennedy speak at BYU was a big deal,” said Peterson wrote an article about the speech that was published in a national publication. After that, he was invited to speak in Los Angeles, and then his career catapulted.

Peterson has taught at five universities as a professor of human resource development and has been in demand worldwide as a consultant. He recalled when BYU contacted him to join their faculty. “I was contacted by Lorin Wheelwright, who was a musician a publisher. I was in his big house, and he started to play the organ. He played a composition of his entitled, ‘Help Me Teach with Inspiration,’ and then he asked me if I could teach with inspiration. BYU hired me to teach, and I started in the communications department,” said Peterson.

Peterson confesses he is a writing nerd. He has authored or co-authored more than 20 books. One of his books, Fake Work, co-authored by Gaylan W. Nielson, was published by Simon and Schuster and became a best-seller. One reviewer said, “This book is the first book I’ve read in a long time that changed the way I think about work. This book tackles the biggest problems I find with my teams, my employees, and my job. I have found numerous ways to increase productivity, increase morale, and reduce workloads by killing the ‘Fake Work’ in my business.”

Peterson is a partner and co-founder of the Work Itself Group, Inc, an organization providing learning interventions that help organizations and individuals align strategy with work. In addition, he serves as chairman of the board of two learning and change companies, Integrative Learning Corporation (headquartered in Singapore) and Peterson Gillespie International (a U.S.-based learning company).

Peterson was chairman of the Communications Department at BYU and oversaw the motion picture studios and student newspaper. He became an Associate Dean of the College of Fine Arts and Communication and then became a faculty member in the Marriott School of Business.

After retiring from BYU, he continued to consult around the world. “I traveled a great deal of the time. I moved to Spanish Fork because it was faster to get to the airport than from Alpine, where I lived for many years,” he said.

When asked about communication in a digital age, Peterson said, “My son, Dan, and I are collaborating on a book to address this very question. Human relationships have changed because there is less face-to-face interaction. Our youth are being hurt in this regard. Our book is about the importance of “in-person” communication. Kindness is escaping our society. We need to learn how to love and care about people. It is difficult to do that with a hand-held device. Trust is also harder to achieve.”

Peterson is also working on his personal history. “I ran across a two-page letter from my dad. This letter has made a difference in my life. Dad said, ‘Nothing else matters in education but loving your students. So, my direction in life is in that area.”

He reminisces fondly about his high school classmates. “We decided we needed to meet more than once every five years. So now we plan something every year. Growing up in Lehi was such a great experience. I especially loved Norine Fox, I loved her when I was a youth, and I still love her now. She was a great teacher who influenced my career in many ways. I am certain she would not believe I have written a few books, in spite of my poor use of the English language.”

Peterson is married to Arlene Jones Peterson, and they are the parents of three children: Amy, Dan, and Caroline.