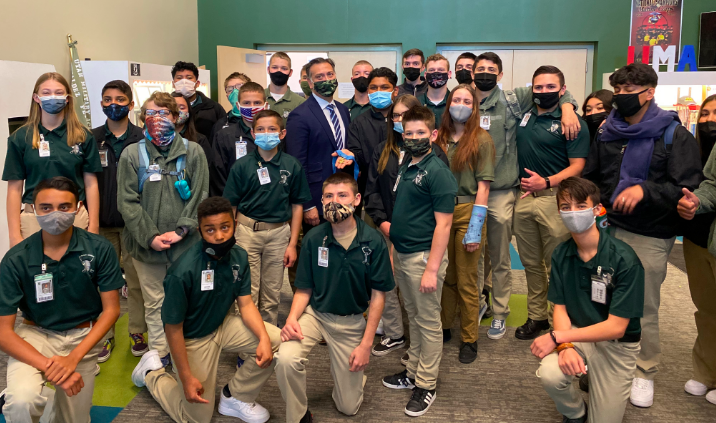 Sergeant Bellavia enlisted in the U.S. Army in June of 1999 and served in various units such as the 3rd Platoon, Alpha Company, 2nd Battalion, 2nd Infantry Regiment, 3rd Brigade Combat Team, and the 1st Infantry Division. He is also the author of House to House: A Soldier’s Memoir, a Time Magazine journalist, host of radio talk show WBEN in Buffalo, New York, where he was born, and serves on the board of several veteran charities.

Between being a special guest on the Tonight Show, interviewing on podcasts, and inspiring millions of Americans with his speeches, the military hero made a trip to Lehi, Utah, on the morning of Wednesday, May 12. Bellavia visited the Utah Military Academy (UMA), located in West Lehi, where he addressed the cadets and staff members of the school.

Although his military achievements and acts of service had the crowd’s attention, Bellavia left the cadets at UMA empowered with hope and motivated to serve our country. “America is worthy of any sacrifice,” he said. “The army gave serious substance to my life. The army taught me accountability; it enabled me to become the person I wanted and needed to be. It left me no excuse to be mediocre.”

Bellavia did a question and answer session with cadets following his remarks. Afterward, he remained in the school foyer to take pictures and allow cadets and staff to ask questions and hold the Medal of Honor.