Residents get their way on 1200 West zoning 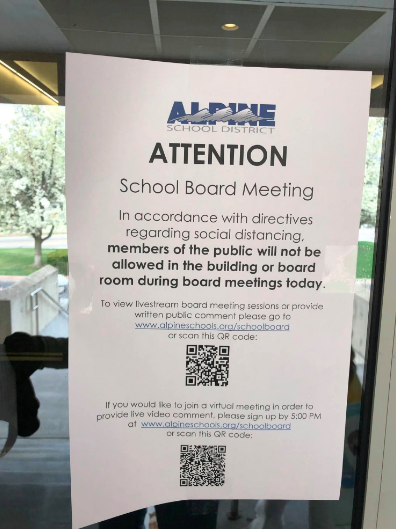 As government COVID-19 restrictions continue to ease across the state, Alpine School District (ASD) has continued its policy of not allowing the public to attend in-person board meetings as decided by the board members.

“Due to the temporary closing of the meetings to in-person attendance, the Board provides opportunities for the public to participate in an open meeting (Utah State Code 52-4-201 Open and Public Meetings Act) via live stream of board meetings along with accepting public comment in both written and real-time video formats,” said ASD spokesman, David Stephenson.

The Lehi City Council, Utah County Commission and neighboring school districts have resumed in-person meetings and have been open to the public for several months.

When asked why ASD hasn’t re-opened to the public, Stephenson said, “Out of concern for the safety of the public and staff and in accordance with social distance guidelines, the Alpine School District Board of Education temporarily closed board meetings to in-person public attendance. A previous board meeting was temporarily suspended because of the disorderly conduct of certain individuals and their refusal to wear face coverings as required by Utah executive order.”

According to the Utah County Department of Health, Utah County is currently at the “moderate transmission level” for COVID-19. This level does not require physical distancing as long as attendees are not eating or drinking.

Some parents denied entry to the meeting, followed the online comment process and spoke to the board from their phones outside the meeting.

“We kept getting kicked out of the internet link. We could barely hear them [board members]. They could not even hear all of our comments,” said ASD parent Stephanie Grant.

Multiple parents asked if the board would allow one individual to go inside and speak on their collective behalf and were denied.

When asked about what the district will do to ensure the public can comment when technology challenges may occur, Stephenson referenced the public comments logged by more than 35 public members on Tuesday.

Lehi school board member Stacy Bateman didn’t return a request for comment on her stance regarding the no in-person public policy.