Pioneer softball in second place after first round of region play 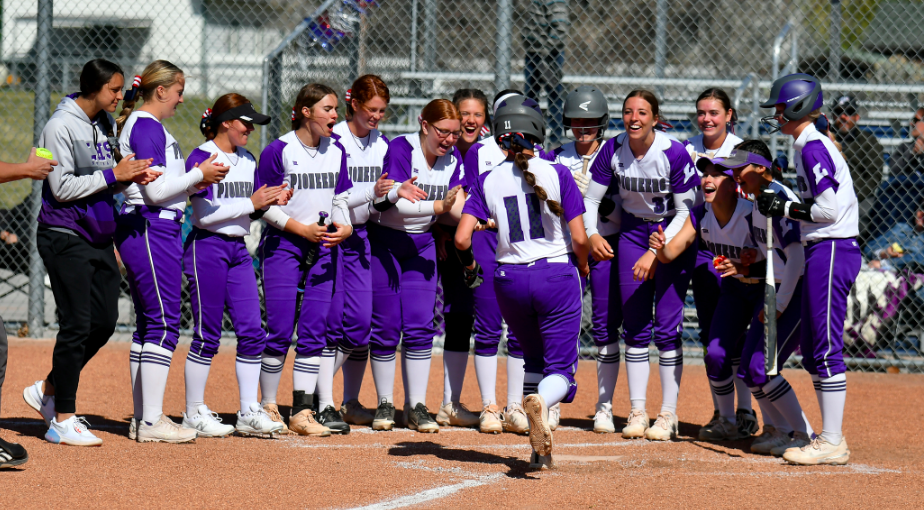 The Lehi softball team continued the Region 7 season with a 3-1 record before Spring Break, topping Mountain View on March 23, Alta on the 25th and Timpanogos on April 1 but falling to Riverton in a non-region tilt on March 29 followed by a loss to Mountain Ridge the next day.

The Sentinels lead in the league standings with an unblemished record but the Pioneers are right on their heels at 5-1 after the first round of play.

Lehi played four games in the Payson Tournament on April 10, winning three games outright over North Sanpete, Payson and Juab and tying Desert Hills in the other.

This exciting contest went back and forth. Despite a seven-run second inning, the Pioneers trailed going into the bottom of the fifth but plated three runs that turn and one more the next inning to secure the victory.

Junior Laynee Carter had a fantastic afternoon at the plate, going 4-for-4 with a double and a triple, stealing a base, scoring twice and delivering three RBI. Junior catcher Kenadee Beck hit a home run, drove in three runs and crossed the plate three times herself.

This game was close through the first three innings but the Pioneers scored 10 runs combined in the fourth and fifth and gave up just two to end the game early.

The Pioneers couldn’t muster much offense against the 6A No.3-ranked Silverwolves. Takahashi and Cram had the team’s only hits.

It was a similar story in this contest. The Pioneers got just two hits, but both were for extra bases. Junior infielder Jamisyn Heaton made a two-run homer and junior left fielder Brooklyn Wiltbank doubled.

The Pioneers led this one from start to finish. Junior pitcher Grace Humes threw a four-hitter, striking out six and walking just one and helping herself with two hits and a pair of RBI. Sophomore outfielder Halley Payne hit a three-run homer and freshman outfielder Madison Salisbury tripled and stole home.

The Pioneers built an early lead with three runs in the second inning and never trailed again. Freshman Emerson Fuller went the distance on the mound. Takahashi, Cram and Beck had two hits each, including one double apiece.

Due to tournament time limits, this game ended in a tie. The Pioneers were ahead 3-2 going into the sixth but gave up a run and couldn’t answer in the bottom half. Carter went 2-for-3 with a double and Salisbury was 2-for-3 with a triple, each driving in one run. Humes had the other RBI.

The Pioneers jumped out early with four runs in the first inning and held the Wasps scoreless until the top of the sixth. Lehi pounded out 13 hits, including a pair of Heaton doubles and a Cram triple. Cram drove across three runs. Humes struck out nine and walked two in the contest.