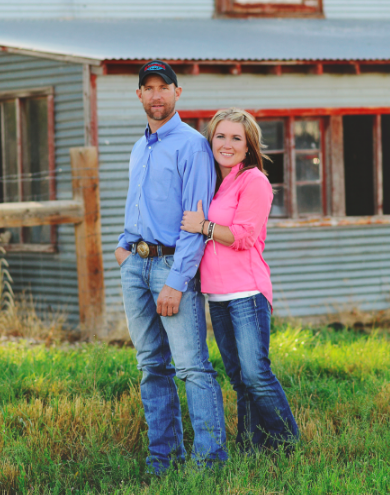 Peggy Lewis singlehandedly organized Lehi’s annual stock parade for decades. After her passing in May 2018, Peggy’s daughter took over the task in 2019. The stock parade didn’t happen in 2020 for obvious reasons. This year, Lehi’s Shawn Winters and his wife Nikki Fox Winters, who each have a family legacy in rodeo and raising livestock, will take the reins.

“Mom really enjoyed and loved the stock parade,” said Round-Up Rodeo Committee member John Lewis, referring to his mother, Peggy Lewis. “We wanted to hand it off to someone who understood the history and legacy of the event,” said John Lewis. “We have a lot of confidence in Shawn and Nikki.”

Lehi’s Stock Parade is the largest non-motorized parade in the state. It features all animals, all the time, from teams of draft horses to wagons and buggies to single riders and kids on ponies.

“We have fought to keep it the only non -motorized parade in the state. Shawn will keep that idea alive,” said Lewis.

Shawn Winters’ grandfather is Lehi’s Bud Lott. Lott and his family are multi-generational Lehi farmers and ranchers who love Lehi’s rodeo legacy.  The Lotts played a huge role in the early days of the Lehi Roundup and Rodeo celebrations. Bud Lott, who is in his late 80s, will undoubtedly offer guidance and his opinion on his grandson’s leadership as he and his wife oversee the event.

Winters, the sexton at the Lehi Cemetery, is also a farrier and has worked by shoeing draft horses. Few farriers know how to shoe large draft horses. Winter and his wife Nikki raise horses now and own a half-draft horse. Nikki Fox Winters’ father owned a dairy farm, and she grew up surrounded by the dairy business.

Knowledge of livestock and horses is crucial to the success of the stock parade, and the members of the Round-Up Rodeo Committee are confident in the duo’s “horse sense.”

“I was hesitant about taking on the responsibility, but my wife and I both grew up in Lehi. We have always enjoyed all the rodeo events. This felt like it was our turn to give back,” said Winters.

“I think everyone is ready to get out and see a parade and have some fun,” he added.

Lehi City has not announced definitive plans about the other parades, which are usually part of the annual city celebration.  “The Rodeo Committee are ‘99% a go’ for the stock parade this year,” said Lewis. “We feel like we can do it safely.”

The Stock Parade always happens on the last Thursday afternoon in June, starting at 6 pm. This year’s parade will be held on June 24, 2021.