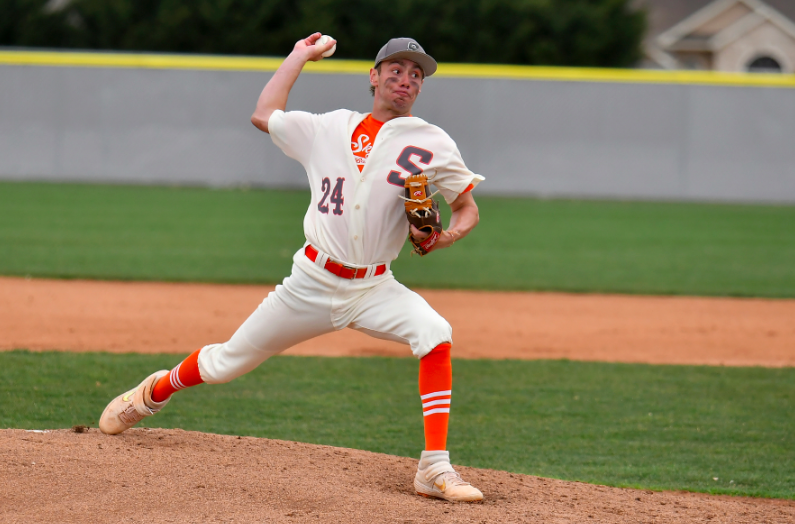 The Skyridge baseball team played two non-region games to start the spring break week, defeating West on April 5 at home but falling at No. 3-ranked Bingham the next day.

The game was tied at 1-1 as the Falcons came to the plate in the bottom of the fifth inning. Skyridge started a big rally when senior catcher Matt Garside doubled on an 0-1 count to score one run.

Senior second baseman JD Berry doubled on a fly ball to left field to drive across the next run, and senior shortstop Garrett Bauer tripled to center field to add another.

Junior center fielder Nick Holland drove in a run as well, while Bauer scored on a passed ball to push the Falcons ahead 6-1. Skyridge plated two more runs in the sixth inning to complete the tally.

Junior Colby Carter was the winning pitcher. He lasted five and two-thirds innings, allowing six hits and one run while striking out 10. Senior Matt Earl threw one and a third innings in relief.

The Falcons racked up 10 hits. Garside went 3-for-3 at the plate with three RBI to lead the offensive effort.

The Falcons stayed toe-to-toe with Bingham in the first inning, each scoring two. Sophomore designated hitter Tyler Ball doubled to drive in both runs for the visitors.

In the third inning, the Miners scored two additional runs to move in front 4-2. Skyridge drew even again in the top of the fifth as junior right fielder Teagan Calton singled on a line drive to right field. However, Bingham scored three in the bottom half and five more the next inning to pull away for the win.

Holland was the starter for the Falcons. He surrendered six runs on eight hits over four innings, striking out four. Senior Ty Power and junior Seth Norton entered the game in relief, throwing one inning each.

Skyridge had 11 hits in the game. Carter, senior third baseman McKade Sampson, Calton and Ball each collected two hits in the contest.