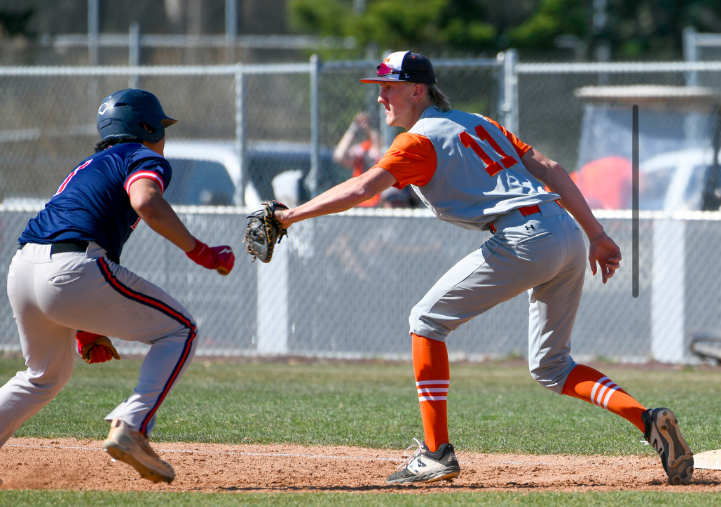 The Skyridge baseball team got going slowly, losing three of their first four games, but the Falcons then won the next four games in a row to post a 5-3 record in non-region contests to get the spring season underway.

Skyridge won an exciting game over Davis on March 30 and then easily topped Springville on April 3. Here’s a few highlights from each contest.

The Falcons were leading 2-0 going into the bottom of the fifth inning, but the Dons got one run then and two more on their home diamond in the bottom of the seventh to pull out the win. Senior McKade Sampon provided the only RBI for the visitors in the contest.

Sampon drove in two runs for Skyridge in this one, while senior Matt Earl picked up the victory on the bump.

In the opening game of the Red Rock Classic, the Falcons tied the score with two runs in the bottom of the third but couldn’t get any more, while the Timberwolves plated one in the fourth and three in the fifth to get the victory.

Junior Colby Carter had a double and junior Nick Holland made an RBI for Skyridge in the loss.

The Falcons got all of their runs in the top of the sixth inning, but it wasn’t enough to overcome the Cavemen’s lead. They had eight hits, only one less than the opponent, but they couldn’t put them together to get runners in.

Senior JD Berry had a double and drove in two runs. Earl provided the other RBI and sophomore Gavin Bauer also doubled.

Carter was credited with the win on the mound and also smacked two doubles with two RBI. Junior Teagan Calton had a home run with four RBI.

Senior Matt Garside tripled and drove in three runs, Holland also had a triple and two RBI, sophomore Tyler Ball added two RBI and Berry drove in the other run.

The Falcons jumped out with a 3-0 lead in the top of the first but Dixie matched that output in the bottom half. However, Skyridge didn’t allow any more runs after that and added to their own totals with a run each in the second and third and three more each in the fourth and sixth.

Holland was the winning pitcher. The Falcons tallied 13 hits, including a pair of Garside doubles and two triples by Bauer. Sophomore Dalton Young also tripled and Calton added a double.

The Darts had a big 10-3 advantage heading into the bottom of the fifth inning, but the Falcons plated six runs to get in range and then drove in two more in the bottom of the seventh to complete the exciting comeback win.

Junior Seth Norton was credited with the victory. Holland had a triple and Berry a double among the 11 hits. Berry, Young and Sampon drove in a pair of runs each, and Holland, Garside, Calton and Bauer supplied one more RBI per player.

The Falcons scored freely in the abbreviated contest against the Red Devils, who didn’t help themselves by committing four errors. Holland pitched for the victory.