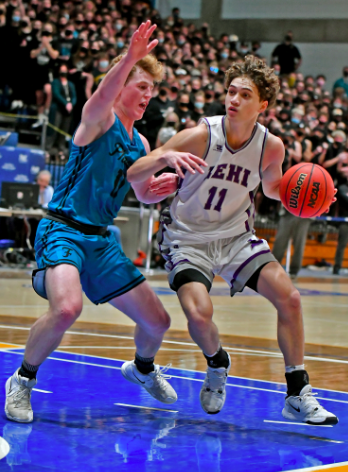 Lehi High School shooting guard Noa Gonsalves was recognized as the 5A Most Valuable Player when the Deseret News released its annual All-State boys basketball awards on April 2.

Despite being a returning All-State performer, Gonsalves flew under the radar for most of the year. After all, the Pioneer boys basketball team did not have the regular season envisioned after winning the Region 7 title last year and returning most of the squad.

Though the team remained high in the RPI rankings because of its strength of schedule, Lehi lost a lot of games on its way to the state tournament and could only manage a tie for third place in the league. The 13-8 record made it look like a middle-of-the-road team at best.

However, something was going on in the background that few people recognized. Lehi Coach Quincy Lewis was laboring to build a winner with Gonsalves as the centerpiece, and when the spotlight turned on, the senior star was ready.

Just look at the numbers. He had a solid regular season as the team’s leading contributor, averaging 18.6 points, 3.7 rebounds, 4.9 assists and 2.8 steals per game. He shot 52.7 percent from the field, 42.9 percent from distance and 81.6 percent at the line.

And in the four tournament games? He averaged 21.3 points per game shooting 60 percent from the field and 50 percent from 3-point range. He missed only one free throw, completing 18-of-19 attempts for 94.7-percent efficiency.

He also averaged 7.0 rebounds, 5.5 assists and 4.0 steals and made three blocks as well, turning the ball over just twice in four games. All as a 6-foot-1 player going against teams with superior size who frequently guarded him with two or three men whenever he got the ball.

“Noa made tremendous progress throughout the year and elevated his game even higher in the state tournament,” Lewis said. “When we needed someone to make the biggest plays, Noa made them. He simply refused to let us lose.”

Lewis inherited a player who was already an offensive powerhouse, but he helped him develop his game in other aspects.

“Noa became a well-rounded player,” Lewis said. “He really took his defense to a different level this year. He became an even more efficient player offensively and scored reliably for us at all three levels.

“His versatility is evidenced by the 13 rebounds he got in the title game and he had six steals a couple of different times during the year,” the coach continued.

“Noa’s a very patient player but one of the most important things he learned this year was where and when to be assertive,” he said. “You really saw that during the state tournament. He took over games exactly when he needed to.

“I would take him first over any other player in the state,” Lewis concluded.