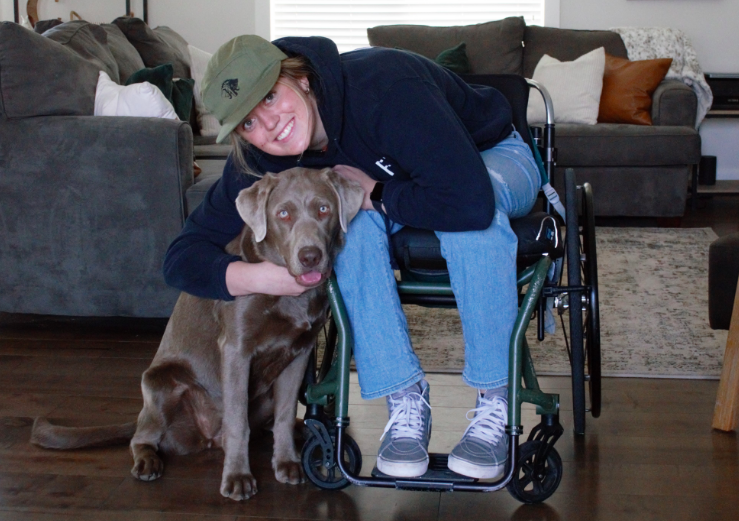 One year ago, Courtney Custer was in Texas serving a mission for The Church of Jesus Christ of Latter-day Saints when she was in an ATV accident that left her paralyzed from the waist down. Hundreds of days of brutal, emotional work later, and Courtney is happy in the life she never imagined.

“The first six months or so that I was home, I didn’t know what to do. I didn’t know how to live anymore,” said Courtney Custer. “At some point, I had to figure out how to move on.”

The Custer’s home and concrete driveway were completely remodeled to accommodate Courtney’s wheelchair. Hallways were widened, a new doorway from the garage to the house was added, and a bathroom upstairs was reworked so that Courtney could do everything from her wheelchair by herself. Neighbors and friends donated all the construction work on the house and even an adapted bike.

In December 2020, Courtney started studying digital media at MTECH. Weeks later, she felt optimistic about her future and happy with her life when one of her friends, Jake Smith, was killed in a car accident while he was serving a mission. “That was tough. It made me look at this milestone of being in a wheelchair for a year differently. I survived.”

“She’s doing good. It took a good 11 months to get here, but we did it,” said Raylene Custer, Courtney’s mother.

In addition to school, Courtney will start a job at the National Ability Center in Park City in May. The National Ability Center adapts recreation and outdoor adventures, making them accessible to people with all abilities. Courtney has been athletic all her life, participating in many sports, but her favorite sport is mountain biking. She recently ordered an adapted mountain bike, a gift from a generous family friend. “It’s hard because I can’t just go for a jog anymore, everything takes more effort and more planning to pull off, but I can still do it,” Courtney explained.

It’s not just sports that are back in Courtney’s life. She’s driving a car again too. She can go from her wheelchair to the driver’s seat, take the wheelchair apart and load it into the car without help. Raylene Custer has had to take a step back and let her daughter gain independence a little at a time. “When it comes to your kids, you’re going to worry. I’ve kind of accepted that there are things that are out of my control, and I can’t spend my time worrying about them,” said Raylene.

One good thing that has come out of the COVID-19 pandemic, which shut most of the country down the same week as Courtney’s accident, is the entire Custer family was home for the first several months for her recovery. Jared Custer, Courtney’s Dad, was able to take her to her almost daily physical therapy appointments because he was working from home. “It was so nice to have everyone home,” remembered Courtney.

“I’m really grateful I went on a mission. I love Texas, and I loved that experience. At first, it was hard to see the photos of my friends who were still serving while I was home, but now I’m happy for them, and I can relate to their experiences,” said Courtney.

There is still a very slim chance Courtney could walk again, but she and her parents know that her success and happiness do not depend on being able to use her legs again. “You can do anything in a wheelchair that you can do without one. You just have to plan more and think outside the box,” said Raylene Custer.