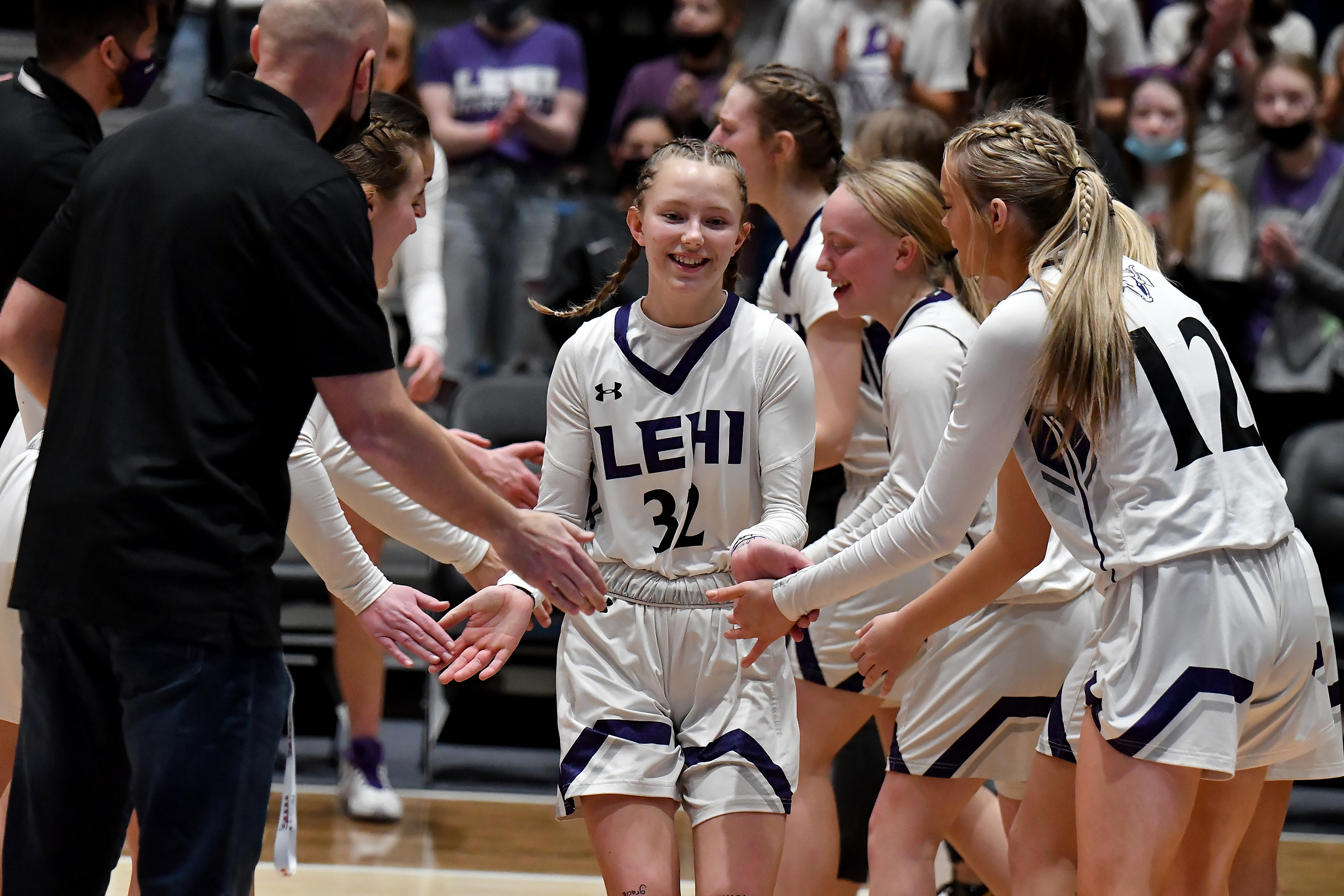 Lehi senior guard Lizzy Rees slaps hands with her teammates as the starting lineups are introduced during the semifinal on Mar. 5. (Photos: Matt Paepke)

The No. 2 Lehi girls basketball team suffered an unfortunate déjà vu on March 5 as the Pioneers were once again eliminated by No. 3 Springville in the semifinal round of the 5A state tournament.

The No. 4 Red Devils knocked No. 1 Lehi out last year with a 48-44 win and finished as the runner-up. The squads faced off in the pre-season in December and Springville prevailed once again 44-37, ironically the same margin by which they won on Friday when it ended 49-42.

However, this time the outcome for the Devils was different as they sank a buzzer-beater to win the state title by a single point on Saturday night.

Despite an experienced, deep and talented roster, the Pioneers just could never solve the dilemma of how to deal with Springville’s interior tandem of 5-foot-10 Lauryn Deede and 6-foot-1 Addisyn Johnson.

The duo combined for 23 points against Lehi, but where they really hurt the Pioneers the most was on the glass. The Devils outrebounded Lehi 31-16 in this contest and those two players accounted for 13 of their squad’s total.

The Springville team’s 13 offensive rebounds yielded 11 points, while Lehi only got four points from second chances – the exact difference in the final score.

In addition, the Pioneers have averaged better than 10 assists per game for the season but could only manage three in this entire contest, a reflection of Springville’s defensive efforts. Lehi had the defensive edge in most of their games this year, but the Devils matched their intensity in this one.

Nevertheless, Springville still had to earn the victory. The Devils led 15-12 after the first quarter, but both teams struggled to score against the opposing defensive pressure in the second period and they were tied 21-all at the break.

It was the third quarter which really did the Pioneers in as they were only able to score five points while Springville netted 14.

However, Lehi wasn’t about to give up, even though the Devil lead ballooned to 16 points with 5:21 left on the clock.

Junior wing Jamisyn Heaton scored a pair of buckets plus a free throw to spark a Pioneer rally and continued to crash the boards. She also hit two crucial free throws when there was less than a minute remaining which reduced the margin to six points.

A Springville player then missed the front end of a 1-and-1 and Heaton snagged the rebound. It ended up in Macie Warren’s hands. Her first attempt missed but she grabbed her own rebound and laid the ball back in to make it 40-44 with 43.1 seconds to go.

At that point Lehi had to foul for possession and the Devils scored their final five points from the charity stripe to wrap up the win.

“Both teams were on a mission for redemption from last year,” said Lehi Coach Sean Seastrand. “Springville lost in the championship and we lost to Springville in the semis. It was simply a tough game. “We evened things out at halftime and felt pretty good going into the second half,” he continued. “It just got away from us a little bit and they got up double digits.

“I’m so proud of our girls fighting all the way back to a four-point deficit, but it ended up being too little too late,” Seastrand said. “Congratulations to Springville on their championship they won the next night. “As far as our season goes, it’s so hard not to let the last loss define your season, but we can’t let it,” he said. “This senior group has put together an unbelievable run, winning three region titles and putting Lehi on the map for girls basketball.

“They have so much to be proud of and it was the pleasure of my career to be able to coach them,” Seastrand added. “Despite the disappointing loss to end the season, we had the time of our lives together this year.”