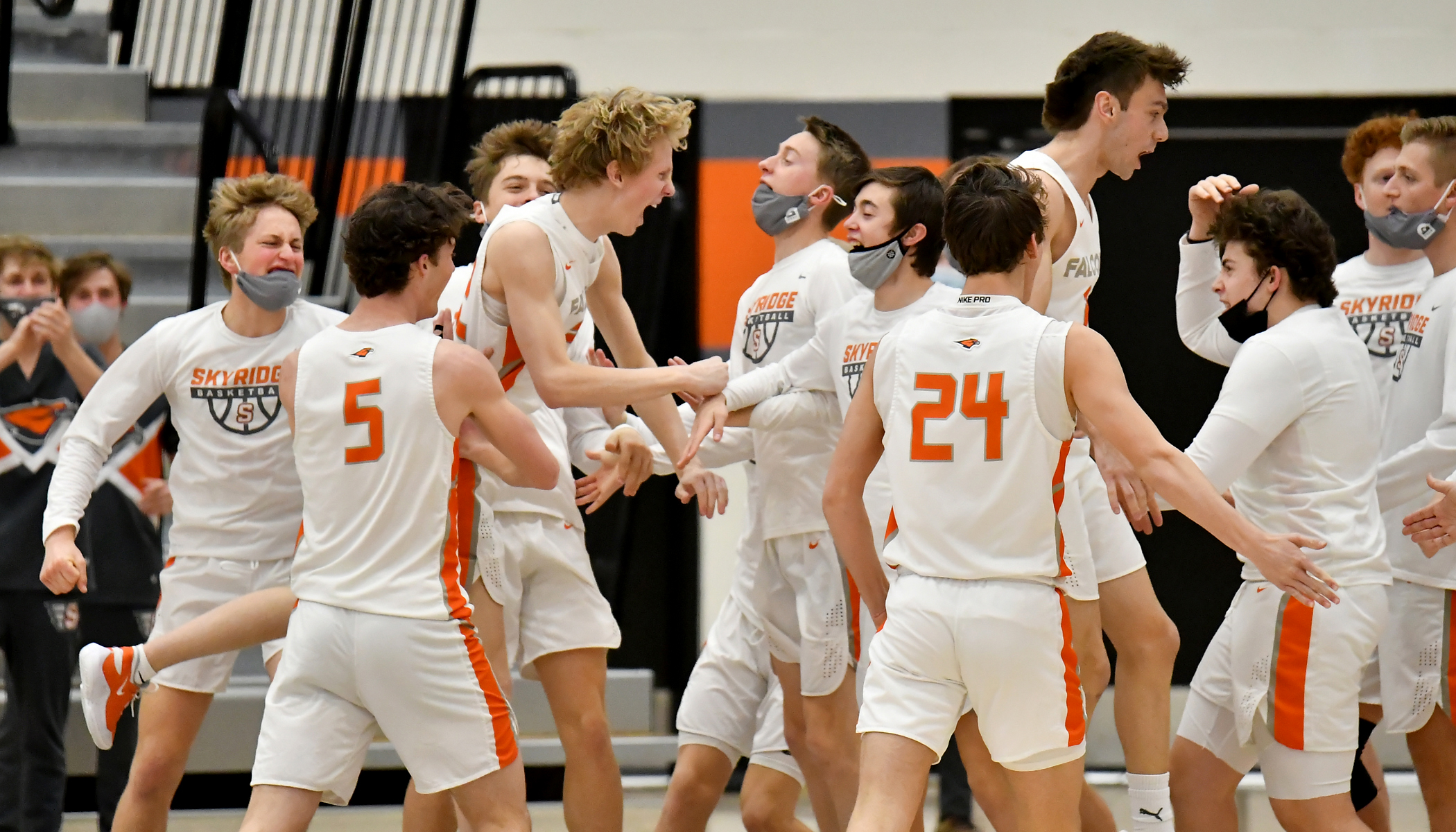 Skyridge players pump each other up as they get ready to start their first state tournament game on Feb. 26. (Photo: Matt Paepke)

The No. 6 Skyridge boys basketball team got off to a strong start against No. 22 Syracuse and continued on to a resounding 83-58 home victory during the second round of the 6A state basketball tournament on Feb. 26. The Falcons had a bye in the first round by virtue of their high seed.

School principal Dr. Joel Perkins has been promoted to a position at the Alpine School District offices at the end of the school year. The team presented him with a photo collage before the game in gratitude for his efforts in support of their program and school activities in general.

Against the Titans, all five Skyridge starters netted buckets in the first quarter, led by senior guard Duncan Reid with eight points. With a strong defensive effort on the other end of the floor, the Falcons built a 23-11 advantage by the end of the period.

Syracuse played more evenly in the second quarter and outscored Skyridge by five points in the third, but the Falcons were still ahead 52-44 heading into the final stanza. Not leaving anything to chance, they outscored the visitors 31-14 down the stretch to close out the contest.

Skyridge did most of their damage inside the arc, completing 64 percent of their attempts. The Falcons were also efficient at the line, dropping in 18-of-22 (82%) tries. Carter and Holland each posted a pair of treys in the win and Christensen had the only other one for the home squad.

“We are very pleased with our team’s effort tonight,” said Skyridge Coach Jeff Gardner. “We jumped out to a 30-11 lead, which was huge.

“I loved the confidence and toughness the kids showed in the fourth quarter,” he continued. “We took care of the ball and made plays to put the game away. Our seniors were not going to be denied and they played really hard tonight.”

The Titans relied on center Connor Saunders to lead them this season. He averaged almost 21 points a game, more than twice any other player.

“Colby Carter and Hunter Anderson did a great job slowing down Saunders, holding him to four points in the first half,” Gardner said. “Duncan Reid had a number of key steals and runouts which set the tone for us early.

“Dallin scored well and hit the boards hard, which was huge for us,” the coach added. “Nick Holland controlled the game for our offense. Parker Christensen was tough to handle, not missing a shot in the second half. His efficiency was key to us shooting 56 percent for the night.

“We held Syracuse under 40 percent shooting and won the battle of the boards 43-22, also big factors in the win,” Gardner said.

Since all six Region 4 teams have advanced to the quarterfinals, they must start playing each other again to continue. The Falcons will visit No. 3 Corner Canyon (17-7) on Tuesday, March 2 at 7 p.m.