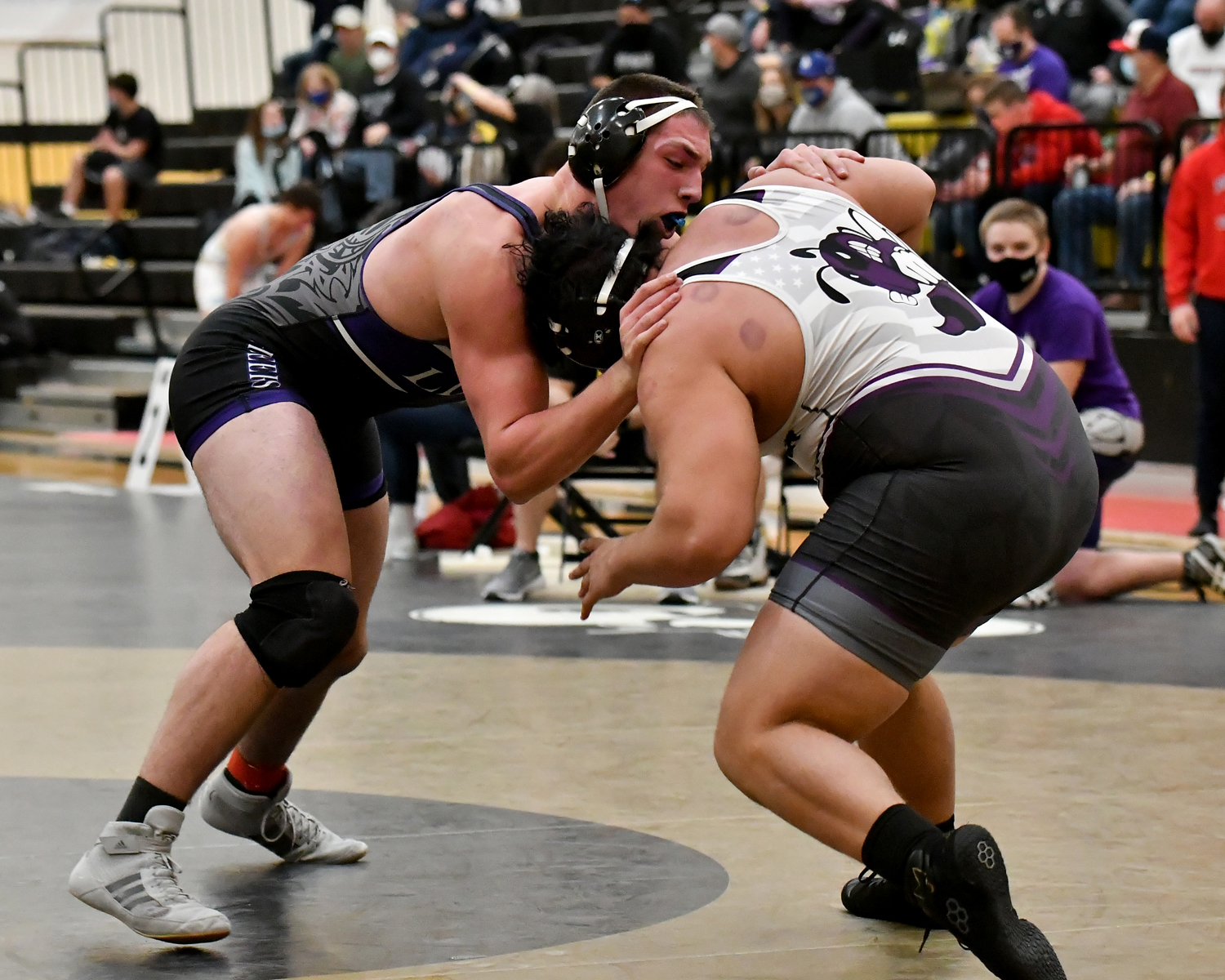 Lehi wrestler Isaac Terrell (left) competes at the 5A state tournament in the 285 weight class on Feb. 18. He finished fifth. (Photo: Matt Paepke)

The Pioneer wrestling team had two fifth-place winners at the 5A state tournament on Feb. 18 at Wasatch High School.

McCleary started out by pinning Viewmont’s Sterling Hansen at 3:01 in the first round. He lost a two-point decision to Maple Mountain’s Andrew Jensen in the quarterfinal, but went on to defeat Payson’s Luke Boswell by 3-1 decision and then won by fall at 3:46 over Brighton’s Bridger Gundry.

He earned a thrilling 3-2 victory over Corbin Carlson of Timpanogos to secure fifth place.

Terrell got his run started by pinning Viewmont’s Matthew Bowen at 1:22. He lost in the quarterfinal to Box Elder’s Kellen Collier but won his final three matches.

He defeated Orem’s Alex Hansen and Payson’s Carter Vasquez by second-period falls and then topped Brighton’s Tyler Knaak with a tense 3-2 victory to secure fifth place.

Lehi qualified 11 grapplers for the tournament this season and eight of them won at least one match in the state meet. The team finished in 12th place with 51.5 points. Payson easily won the 5A title with 268.0 points.

“We had a decent year,” said Lehi Coach Dan Rice. “We qualified 11 and placed two. We had many of our sophomores perform very well and we had several wrestlers lose in the blood round.

“We are a very young team,” the coach continued. “We graduated just three varsity wrestlers. We have been competing this year with two freshman and eight sophomores, so the future looks bright.”

The Pioneers went 15-9 overall and earned a 4-1 record at home, but nothing about the season was business as usual.

“This year was different for Lehi in many ways,” Rice said. “The pandemic changed the way we did many things. The biggest impact was having one-day tournaments (rather than the customary multi-day events), and no out-of-state travel.

“We also had the headache of practicing in an auxiliary gym as our new wrestling room was being used as a weight room until the weight room is completed,” he added. The wrestling room is scheduled to be available again later this year.

Here’s the comprehensive results of the state meet for Lehi’s other wrestlers by weight class.

At 106, senior Parker Richins lost by technical fall to Hudson Palmer of Farmington in his first bout. He pinned Box Elder’s Hunter Crocker at 3:52 in the first consolation round, but exited the tournament after being defeated by Viewmont’s Spencer Lee.

At 120, senior Anderson Packer lost a narrow decision to Spanish Fork’s Junior Wetzel in his first match but went on to defeat Viewmont’s Hudson Daley by 11-6 decision in the next bout. His tournament appearance then ended at the hands of Mountain View’s Cody Burr.

At 126, freshman Ammon Cannon won his first match by 12-2 major decision over Kaiden Heim of Viewmont. He lost by a single point to Austin Kelly of Wasatch in the quarterfinal. In the first consolation round, he beat Duncan Watt of Wasatch by technical fall but then ended the day with another narrow loss, this time to Box Elder’s Wyatt Romriell.

At 160, senior Chans Black lost twice in a row to end his appearance, but it was a positive that he could participate at all after having to withdraw with an injury during the Divisional tournament.

At 170, sophomore Cole Elderedge fell to Ethan Miles of Timpanogos in the first round but rebounded with a major decision over Payson’s Brett Finch 17-7 in his second match. He lost to Monson Morley of Salem Hills to exit the tournament.

At 170, junior Denten Linford lost both his bouts but still made the tournament with just 11 varsity matches to his credit.

At 195, sophomore Trevor Bulpitt posted a 7-5 decision over Box Elder’s Thomas Peterson to advance to the quarterfinal. That was won by Box Elder’s Lucas Cochran, but Bulpitt then scored a fall at 4:58 over Murray’s Kenneth Phillips. He lost a close match to Cash Henderson of Woods Cross in the consolation semifinal.

At 220, sophomore Danny Hoyal also went two-and-out but made the tournament with 17 matches of varsity experience.

At 285, sophomore Nathan Bulpitt scored a fall at 3:33 over Carson Fugh of East to start his day. He lost in the quarterfinal to Mountain View’s Christopher Esparza but then pinned Wasatch’s William Griffin at 5:38 in his next bout. Knaak ended his meet in the consolation semifinal.

The Pioneers will now turn their attention to preparation for future competition. “We will be starting off-season freestyle and greco wrestling soon to get ready for next year,” Rice said.

“Youth wrestling also has been getting better and they are invited to off-season practices. Information will be available on lehiwrestling.com soon,” he added.