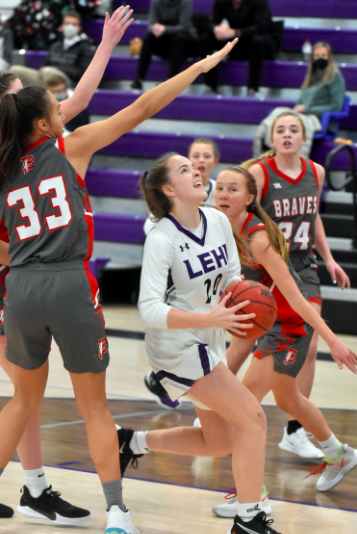 The Lehi girls basketball team thrashed their opponents in the first two Region 7 contests of the season, topping Orem on the road Jan. 5 and outdistancing Mountain Ridge at home on Jan. 8.

The Tigers just never found an offensive rhythm against the stifling Pioneer defense. They trailed 10-18 at the end of the first quarter and were held to single digits in each remaining period.

“It was great to start off region with a road win,” said Pioneer Coach Sean Seastrand. “Our defense was really good in this game and Orem has had some injuries and some girls that are just getting back into rhythm.

“Region road games are important to win so I was happy about this one,” the coach added.

The Pioneers got contributions from all 11 players who saw action as balanced offense and stiff defense after the first quarter propelled them to victory. The Sentinels were ahead 10-8 after the first stanza but were held to 15 points for the rest of the game.

“It was a rare Friday home game for our girls team and it was fun,” Seastrand said. “Mountain Ridge is much improved from last year and came out with a great plan mixing up defenses.

“It took us a little while to adjust to that, but we started to get stops and play in transition to get our second region win,” he said.