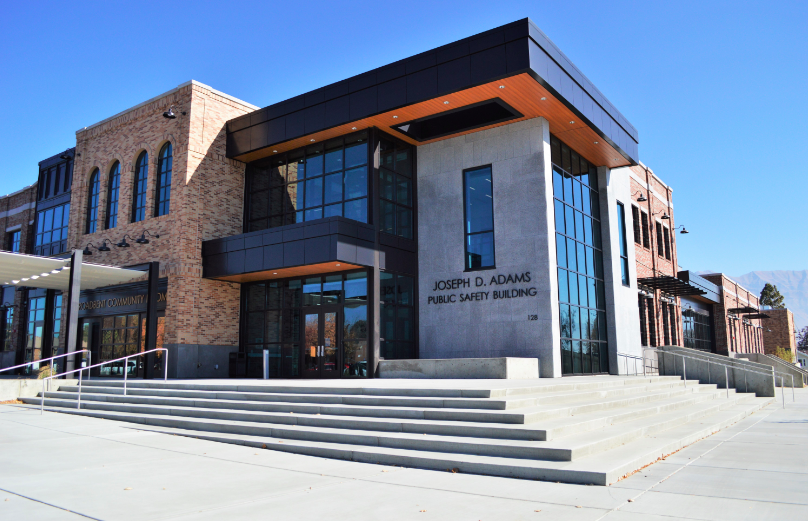 The award-winning Joseph D. Adams Public Safety Building officially opened on Thursday, October 29, after 16 months of construction. Among the new building’s state-of-the-art features is a community room lined with bricks from the old Broadbent’s store that occupied the same address for 135 years.

“We’ve watched the construction progress carefully. It’s helped ease our minds to see what a great job they’ve done,” said Bill Anderson, husband of Betty Broadbent Anderson. “A couple of times Betty has asked me to go make sure the store is locked up,” chuckled Bill, reminiscing at the ribbon-cutting ceremony and luncheon.

“I noticed today that the address is 128 North 100 East, just like the store. That was fun to see. I’m really happy. I’m honored,” added Betty Anderson. Many generations of Broadbent family members operated to venerable Lehi business over the years.

Thad and Rosemary Adams also attended the ribbon-cutting for the building that bears their son’s name. “We didn’t know what to expect when we found out the police building was moving from State Street,” said Thad Adams. “We never dreamed it would turn out so well. It is a living, active memorial to our son. I can’t tell you what that means to us. He will always be included in this department.”

Officer Joseph D. Adams was shot and killed during a traffic stop near 2100 N 1200 West on August 3, 2001. He is the only Lehi police officer ever killed in the line of duty.

“This really was a once-in-a-lifetime project for us. We wanted to make sure it fits in Lehi, so we learned about Lehi’s history and especially Broadbent’s. There’s really nothing we would have done differently,” said Dallas Nelson, an architect from Curtis Miner Architecture. The Public Safety Building recently won the High Achievement Award from the Utah Chapter of the American Planning Association.

“This turned out so beautiful. What a compliment to the city and the community,” said former Lehi City Mayor Bert Wilson. “I’m blown away – it has far exceeded my expectations.” Wilson and former City Council members began the process for the new Public Safety Building more than a decade ago.