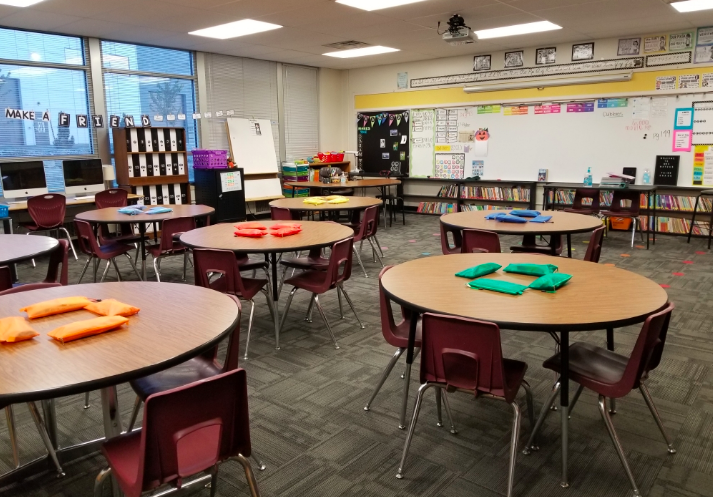 It was a scene, as one teacher put it, reminiscent of Chernobyl.

Lunch boxes were in cubbies. Coats remained on hangers. Elementary school whiteboards had the same date written on them weeks later.

Students left their classrooms in March with plans to return two school days later, giving teachers time to prepare for the possibility of switching to fully online learning as the first days of the COVID-19 pandemic hit. Instead, schools across the nation changed to online learning overnight, and what was thought of as something that might only last a few weeks extended through the entire school year.

The pandemic impacted every aspect of education this year, including delaying a potential $500 million Alpine School District bond from the 2020 ballot, seeing a reduction in parental support for using online learning to manage the district’s growth and polarizing parent opinions about face mask requirements in classrooms.

The district loaned thousands of Chromebooks to students. It soon became apparent due to varying home situations throughout the district; at-home learning was not adequately happening in many homes. The ASD decided in late April to give no failing grades for the academic year’s final quarter. Instead, students who had a grade below a C were assigned a “pass” grade, which gave them credit for that course without impacting their grade point average. Students who received a grade C or above could choose between keeping their letter grade or getting a “pass.”

The district also decided to stop assigning work after May 12 and allowed students to turn in any late work until May 19.

With responses to online learning varying by student and teacher, the Alpine School District Board of Education decided to move to end schoolwork early and adjust to giving grades in a “no-harm approach,” which allowed students and families’ grace.

As students returned in August, families enrolled their students in either online education or face-to-face learning in physical schools. Governor Gary Herbert enacted a statewide mandate requiring masks in most classes. This requirement led to a group of parents attending a July 14 board of education meeting calling the mandate government overreach.

The district saw its population of homeschool students grow, jumping from 481 students pre-pandemic to 1,319 by the end of August.

About 87% of Alpine School District students returned to face-to-face learning in the fall, and sporting events were limited to 25% capacity.

Skyridge High School transitioned to a hybrid learning model for two weeks in November due to the school’s number of COVID-19 cases. Both Lehi High School and Lehi Junior High School also saw numbers rise, but the rise did not reach the district’s threshold to close the school temporarily.

Every parent with a child in the Alpine School District continues to experience significant changes to their family’s educational routine due to the pandemic.