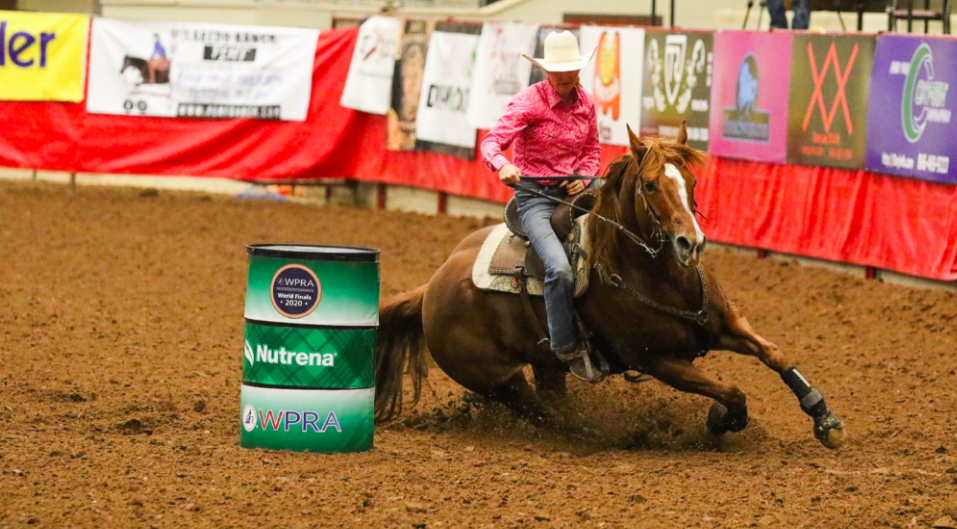 Like many people when they reach their half-century birthday, Amy Revill Bush considered what was on her bucket list. Her list was short, there was just one experience she wanted to try again after a 35-year hiatus: competitive barrel racing.

“I always wanted to do it again. Barrel racing is a big time and financial commitment, and I didn’t want to miss anything with my kids to do it,” said Bush, a mother and grandmother. When she reached her 50th birthday in 2019, her youngest child was out of the house and her grandchildren were still babies. It turned out to be the time to get back to the sport Amy loved in high school.

Amy Bush grew up with her Dad, Chuck Revill, racing quarter horses. She would jockey for her Dad, exercising horses on a track, but Chuck would never let her race. It was great training for barrel racing. “There’s nothing like the rush of being in competition,” said Bush.

At 51, Amy Bush is more meticulous in her training than she was as a 15-year-old. “We waited a long time to get the right horse. A good horse is the most important thing,” explained Bush. She trains in Texas with two different horses. One of her horses is older and more experienced and the other is young and fast but needs more time drilling and practicing. Amy herself needs to be in great physical condition to race at the level she is. “It hurts more when you’re not in shape,” she said.

The Bushes spent several weeks in Texas getting ready for the All-In Barrel Race she competed in during the second week of December. Amy’s husband Brian Bush, a former bull rider, has encouraged and supported his wife’s goals as soon as she told him she wanted to barrel race again. Amy qualified for the final and placed fourth in her division at the All-In Race. Her ultimate goal is to compete in the National Finals Rodeo.

“There are a lot of opportunities for barrel racing outside of rodeo. The industry has grown and anyone who loves to ride can compete. It’s great practice, but rodeo is a totally different game altogether. There are a lot of variables that you can’t control in rodeo,” said Bush.

The next race for Amy Bush is a few weeks away in January 2021, back in Texas. The Lehi mother and grandmother will be ready with her children and grandchildren cheering her on.