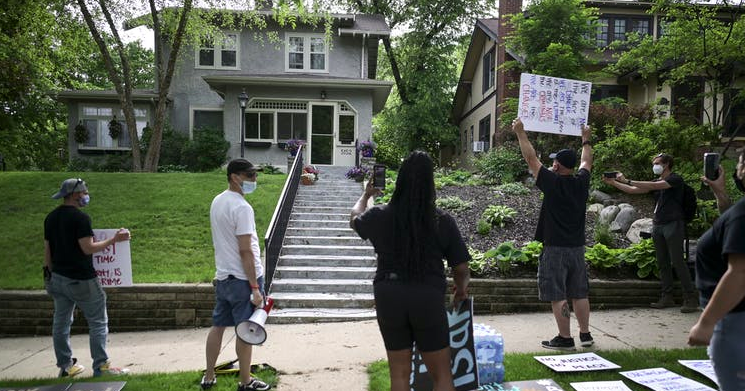 The Lehi City Council met Tuesday night for a marathon meeting ending after midnight into Wednesday morning. The packed agenda included an ordinance prohibiting protests within 100 feet of a targeted residence.

City officials created the ordinance due to recent protests at Governor Herbert’s home in Orem and newly elected Governor Spencer Cox’s home in Fairview. The bill acknowledges both protesters’ rights and the rights of homeowners who are the target of protests.

“The City Council desires to establish reasonable time, place, and manner restrictions that reconcile and protect the First Amendment rights of picketers to peacefully communicate and express their ideas with the right of persons to enjoy the right to tranquility, well-being and privacy in their residential dwellings”.

The ordinance wasn’t approved without objection. Councilwoman Katie Koivisto had concerns regarding the infringement of rights and the difference between protesting and rioting.

“I just feel like it’s stepping on Constitutional boundaries. I slept on it, and I just don’t feel good about it. It’s just going to be a no vote from me,” said Koivisto.

“Once it’s angry and violent, it’s no longer a protest. That’s vandalism, that’s a crime, that’s rioting. I feel like there are already laws in place for rioting. With protests, maybe It’s just I live in my own bubble in the world. The idea behind protesting is for it to be peaceful. I look at Martin Luther King, and it was a peaceful protest,” argued Koivisto.

Councilman Paul Hancock stated his support for the ordinance, “I think what this is trying to accomplish is preventing protests from turning into riots.”

“It was carefully crafted to make sure it will Constitutionally hold up in court, and that’s why I have no issue with this,” added Hancock.

“I think we have a right to feel safe in our property. My kids didn’t sign up for [this],” said Councilwoman Paige Albrecht, who supported the ordinance.

The ordinance protects any Lehi City residence from being specifically targeted, not just homes of elected officials.

The ordinance was ultimately approved by a 4-1 vote, with Koivisto dissenting.