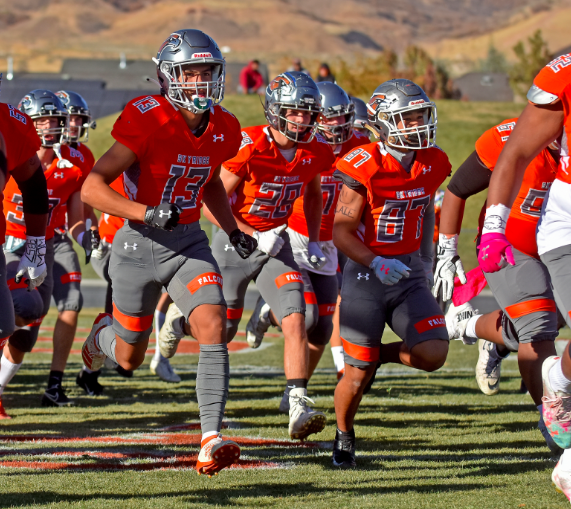 Before reporting the results of the fall season, we’d like to acknowledge the efforts of everyone who made it possible for there to even be one.

From school staff to coaches to health department officials along with players and their families, the united efforts of multitudes of people were required to both restart prep activities, and then to keep them going. All our young athletes are grateful to you for making their participation possible.

That said, here’s a roundup of how our local teams and competitors fared during the fall season.

Best finish: Skyridge reached the semifinals of the 6A state tournament.

The talent-rich Falcons had an impressive season and were just about the only team to give state finalists and fellow Region 4 contestants Lone Peak and Corner Canyon a run for their money, but in the end they couldn’t quite solve the riddle. They lost to both teams in the regular season and then again to the Knights in the semifinals to finish 9-3. Best news: Super sophomore quarterback McCae Hillstead has two more seasons to play.

The Pioneers finished 6-5 in the 5A ranks but could easily have been 9-2 had they made a few more plays in their three single-digit losses. Two of the losses were to the teams that ended up playing for the 5A state title. Lehi lost some key players to injury during the course of the season which depleted the depth chart but there were still enough horses to win the race most of the time. After the opening blowout, the Pioneer defense played well enough to keep the team within reach in every contest but offensive inconsistency proved costly.

Best finish: Lehi won the Region 7 championship and reached the second round of the 5A state tournament.

The Pioneers earned a 10-2 record in league play and their first region championship in a decade despite losing their top defender to injury partway through the schedule. They defeated a good Timpanogos team twice during the regular season but drew the Timberwolves again in the second round of the tournament and couldn’t pull off the three-peat. They finished with an overall mark of 13-5.

Region 4 was represented by four teams in the state quarterfinals and the Falcons had as much trouble competing with them as the rest of the state. They finished at 6-12. It was an up and down year for Skyridge but the Falcons will return a lot of experience next season.

Best finish: Lehi reached the quarterfinals of the 5A state tournament.

The Pioneers endured the full brunt of this year’s bizarre circumstances as the entire team had to be quarantined for a period, and key players missed some matches the team did play because of virus protocols. They played eight matches in two weeks to make up what they missed and won their first two tournament outings handily. They fell to top-ranked Bountiful 3-2 in the quarterfinals after pushing the Braves to the end. During the regular season, Lehi split with both teams that played for the 5A title.

The Falcons earned a lot of success outside their league but struggled against the Region 4 powerhouses, all four of whom reached the state quarterfinals and one took the top prize. Skyridge swept Jordan in the first round of the tournament but bowed to an 18-1 West Jordan team 3-2 in the second round.

The nationally-ranked Falcons performed like champions throughout the regular season, winning every boys event and with the girls placing in the top five each meet. Creed and his brother Davin along with Seth Wallgren earned medalist placements all year. The boys edged American Fork for their first title. The Cavemen had previously won nine of the last 11 gold trophies.

The Pioneers won the boys title at the Timpanogos Invitational and Jefferson McMullin was the gold medalist there and also at the Small Meet Saturday event. He and Barlow had multiple top-10 finishes during other competitions in the season. At the 5A state meet, the boys were 10th and the girls 17th in the team standings.

The Falcons battled a tough field in Region 4 all season and saved the best for last, surpassing them all in the 6A state tournament. All five Skyridge entrants reached the semifinals, and two of them earned silver medals, Savannah Johnson in No. 1 singles and Payton Carroll and Kylee Sperry in No. 1 doubles.

The Pioneers overcame a shaky start to string together a series of victories to finish the Region 7 schedule. At the region tournament, Lehi’s singles players all qualified for the state tournament for the first time in five years and the doubles matches were competitive. Caroline Moon reached the quarterfinals in No. 1 singles at the 5A state meet.

Skyridge finished third in Region 4 competition behind American Fork but edged the Cavemen in the state tournament with a big surge the second day.

Lehi dominated the competition in Region 7 until losing a top player to injury halfway through the season. They still finished on top of the league.