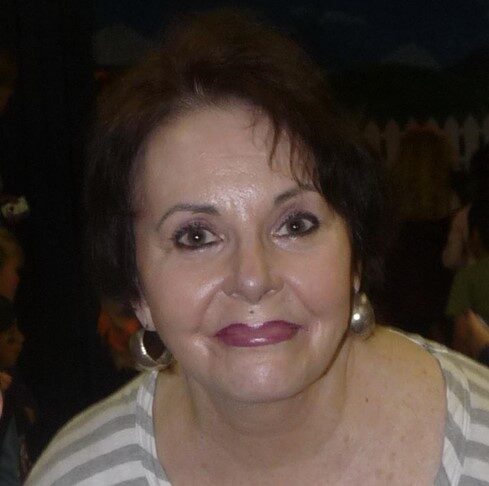 On the morning of November 15, 2020, JoAnn Evans, 80, passed away peacefully in her sleep and reunited with her Father in Heaven. She was born, February 28, 1940, in Lehi, Utah, the second of five children to Neldon “Dick” Evans and Dorothy Evans (Smith). JoAnn regaled her children with her many fond memories of growing up in Lehi with her siblings, cousins, and friends.

At Lehi High School, she matured into a beautiful and intelligent young woman, graduating as a cheerleader and Homecoming Queen from Lehi High School in 1958, earning a scholarship to Brigham Young University in Forensics. It was in these formative years that she acted on her sense of adventure-bug that repeatedly afflicted JoAnn throughout her life. She left her formal education for real-world learning. By 1960, JoAnn was working for United Airlines as a Stewardess, as they were then called, stationed in Chicago, where she soon met her future husband, John Torrens.

JoAnn and John married at Camp Williams, Utah, in 1962. They moved to Oshkosh, Wisconsin in 1964 where John worked as the City Forester and Superintendent of Parks where they soon found themselves raising their first son, Michael (1965) and two bear cubs: Clem and Clara. A higher paying job took them to San Francisco where they added to their family with the births of three more children and where their rent increased from $90 to $300 per month. Ever the social butterfly, JoAnn carved out her own niche in California making life-long friends with other young families in her church.

In their first house, on Tyler Street, she made a splash by hosting elaborate neighborhood puppet theater performances, selling Amway, making macrame purses that John sold in The City on his lunch hour and flaunting her flare for fashion with her sequined dresses, fur coats, and feathered wigs. A memorable moment came when she announced to John that she bought a $300 stereo with 37 cents down and the rest on layaway.

In 1975, the family moved to Petaluma into a prominent 3-story Victorian home that JoAnn truly loved furnishing with spectacular paintings, extravagant gold-leaf furniture, a beautiful Russian Egg, and even a slot machine! She loved the holidays and would go all-out decorating for the annual Christmas Party with Christmas trees in nearly every room of the house.

Also active in the children’s school, she would dress up, bring a heavily decorated gingerbread house, and read in an animated voice the story of Hansel and Gretel in the kids’ class rooms, instilling the importance of imagination and the art of performance. As a parent of teenagers, she believed in forced piano lessons, dressing up when you go out to a nice restaurant, and writing thank you cards.

In the early 1980’s, JoAnn experienced some impactful changes. She bought the Mode O’ Day dress shop in downtown Petaluma where she could foster two of her talents; a passion for fashion and a flair for helping people look their best. By 1984, she and John divorced, and JoAnn needed to enter the workforce. For the next thirty years, JoAnn enjoyed working as an administrative assistant for several organizations both in California and in Salt Lake City. In these roles, she impressed with her uncanny ability to grasp the new tools of the digital world.  Turns out she had a penchant for spreadsheets and labeling that lasted her lifetime and will, no doubt, last ours as well. She loved to come over to organize our lives by labeling our closets and drawers and sometimes even secretly throwing things away she didn’t think we’d need or miss.

During her years as a single parent, JoAnn relied on her strong friendships for companionship.   Whether it was a weekend away to Las Vegas for a Jimmy Buffett concert with her brother, or a dinner and a movie with a friend, she cherished those relationships. She was fortunate to have traveled the world over with friends and family. Those memories were precious to her and she recounted them often.

It was while in Utah she accomplished the pinnacle attainment for her, which was being a grandmother. With the arrival of grandchildren in California, “Grandma Jo” as she was affectionately called by her grandchildren, moved back to California to be closer to them. For a time, JoAnn lived with son Michael and his cute family as well as with long-time friend Jenny Laycock. However eventually JoAnn had her own condominium in Napa, crammed full with the same Victorian furniture, where she loved hosting grandchildren-even holding a highly successful “potty-training” camp for her grandsons directing them to “aim” at Swedish Fish in the toilet. Time spent with Grandma Jo was cherished as the grandchildren knew they were in store for a trip to Target or the Hello Kitty store, maybe a swim in the pool, or a story read to them while sleeping in the Murphy bed. When they left her house, grandma always left with a kiss and a hug because one was not enough. As the grandchildren grew and the families matured, so did the complexities of their lives but still she sent Christmas ornaments and birthday cards with some “hamburger money.”

She overcame many health issues including several bouts of different cancers over the years.  She would tell you that the hardest thing she had to endure was losing her son In 2014. With that great loss, she struggled to make sense of the world and it’s cruelties. That said, she battled them all with an incredible sense of humor, a deep faith in God and a determined effort to bring light into the lives of those who called her Mother, Grandmother, Aunt, Sister or Friend.

A bright light has gone out with the passing of this incredible woman. Her glitz, glam, and sparkle will live on in all of us who were blessed to know her and be in her company. Hopefully, we all have a little more razzle-dazzle in our souls, heads and hearts thanks to her.

JoAnn’s final resting site will be in the Lehi City Cemetery. Due to COVID-19 restrictions, a celebration of life will be held in Lehi, Utah in August of 2021, with details to come. In lieu of flowers, please make a donation to The Road Home, a homeless shelter.