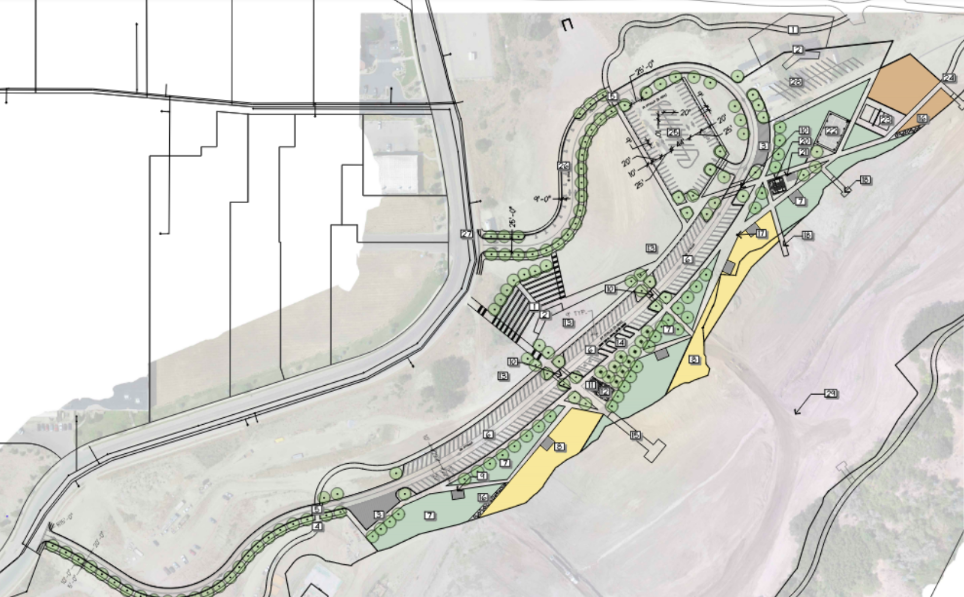 The Lehi City Council met on November 10 with all members in attendance, although Councilman Paul Hancock participated remotely after being potentially exposed to COVID-19.

Jason Bond, from the Parks Department, presented the council with an update on Dry Creek Reservoir. The lake, with an anticipated opening in April, of 2021 is located on the Lehi and Highland border, just east of Smith’s Food and Drug.

Bond showed the council an updated design plan and announced several new features, including the addition of grass areas up to the water’s edge, to complement already planned sandy beach areas. Other recreational additions include multiple fishing docks and numerous pavilions that will be available for residents to reserve. Bond also announced the lake would be accessed with a one-way in and one-way out traffic flow on the southwest corner.

“Parking is going to be an issue. That is one of the biggest issues this site is going to see is insufficient parking. Compared to other reservoirs in the state, we have quite a bit more, but the message we’ve gotten from other reservoir operational people is that you will never have enough,” said Bond.

“We’ve maxed it out,” replied Bond. Later in the discussion, the council suggested a few potential parking opportunities if demand warranted it in the future.

Councilwoman Paige Albrecht found a positive in the potential parking limitations, citing a better experience for those using the lake. “Even if you have five times as much parking lot space, it doesn’t mean the lake and the facilities can accommodate. The parking might be a good way to sort of make sure the numbers are manageable.”

“We have two or three times more [parking] than Tibble Fork,” said Mayor Mark Johnson in defense of the parking situation.

After updating the council on the design plans, Bond continued his presentation into the financial update, including a funding deficit.

The recreational portion of the preliminary plan has an estimated price tag of just over $4.5 million. The water retention and utility part of the project is fully funded and on schedule.

With a price tag of over $4.5 million, Lehi is short approximately $1.4 million. Currently, the City has committed $1.5 million to the project and has also received $150,000 from a Utah Outdoor Recreation Grant. The Parks Department has also recently requested $1.5 million from the Utah County Tourism Tax Board and has received a positive recommendation with the funds pending approval by the Utah County Commission.

To try and close the funding gap, Bond said the Parks Department is exploring the possibility of paid parking, non-motorized boat rentals and food and beverage sales. “We understand this is a regional draw. We are interested in shifting the burden and cost of operating this away from just the Lehi city taxpayers and onto users of the park,” said Bond.

“We hired a concessions consultant, and he recommended building a full concession building–more along the lines of a restaurant, essentially an outdoor grill. Hamburgers, chicken strips, high-quality food, not your typical hot dogs and corndogs,” said Bond.

The proposed concession stand would cost between $750,000 and $1 million to build, adding to the already $1.4 million project deficit.

The council positively responded to the concession proposal with Councilman Mike Southwick and Councilman Chris Condie sharing the sentiment, “I want it done and done right.”

“I feel like concessions are cash cows. It’s worth the investment to me. We can always decide later if we want the City to be the ones making the food and creating that infrastructure or just leasing it out and capitalizing off of the businesses that come in. We take a percentage of those sales coming in,” said Councilwoman Katie Koivisto.

“I agree with Katie. I would fund the [concession plan] even if it takes a year to have paved parking lots and it’s just gravel lots. I think in the long run, having concessions there would be a huge asset to the City,” agreed Councilman Paul Hancock.

Councilwoman Albrecht was the only member to share concerns around the proposed concession operation.

“I don’t want to take away from other park projects to build a snack shack here. That’s one of my concerns,” said Albrecht.

The council ultimately gave Bond and the Parks Department a positive recommendation toward designing and planning for the concession facilities. Funding will continue to be explored, and the recreational facilities will be built in a phased approach to extend funding opportunities.