Pioneer volleyball exits tournament after loss in 5A quarterfinals 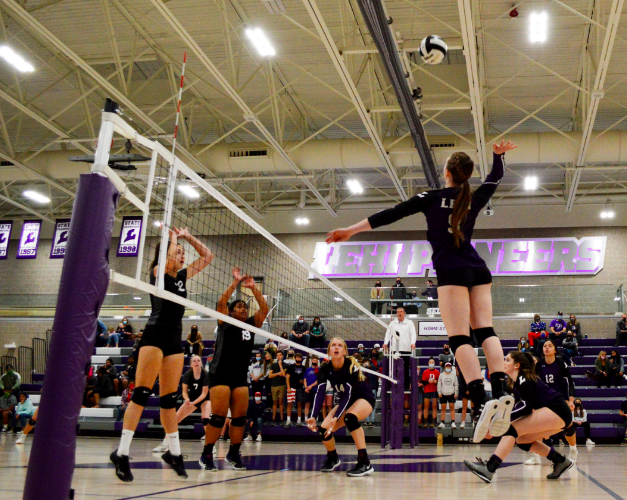 The Lehi High School volleyball team ended their 2020 season in a five-set quarterfinal match against top-ranked Bountiful on Nov. 5 after easily overcoming their first two opponents, Provo and Box Elder, in the first two rounds of the 5A state tournament.

“I could not be prouder of the girls and their resolve to not let all the craziness get the best of them,” said Kolton Rader, Lehi head coach.

Like many teams in Utah, the Pioneers had to quarantine for two weeks in September and played four make-up games on top of the normal schedule in the weeks leading up to the tournament. “They took the punches and just kept going,” Rader continued.

On Nov. 3, the Pioneers started the first round of the tournament at home against the Provo Bulldogs. Lehi shattered the Bulldogs, winning three sets in a row 25-9, 25-15, and 25-12.

The hometown crowd and the rest of the team cheered wildly when seniors Ashlin Willis, Marlee Lotaki, Ashlyn Barry and Ashlin Burton were put in the game.

“I am so proud of our senior class and the way that they led us through these tough times. Each of those girls are special and will do amazing things in the future,” said Rader.

Junior outside hitter Avery Shewell led the team in kills with 12 and added five service aces as well. Junior setter Paia Kaohelaulii and senior setter Macey Faddis had 13 and 12 assists, respectively, against the Bulldogs.

The Pioneers were back at home for the second round of the tournament the next day against the Box Elder Bees. Although the Bees were ranked ninth and the Pioneers eighth, Lehi destroyed them in three sets, 25-19, 25-7 and 25-12.

The Pioneers were on the road Nov. 5, meeting the No. 1 Braves in Bountiful for the quarterfinal game.

The Braves reversed the score in the fourth set, beating the Pioneers 25-23. Going into the fifth and final set with a tied score, Bountiful pulled ahead and ended Lehi’s run with a score of 15-8.

“We learned a lot this year as a group and I’m confident that we will come back next year poised to compete for the state title,” said Rader.