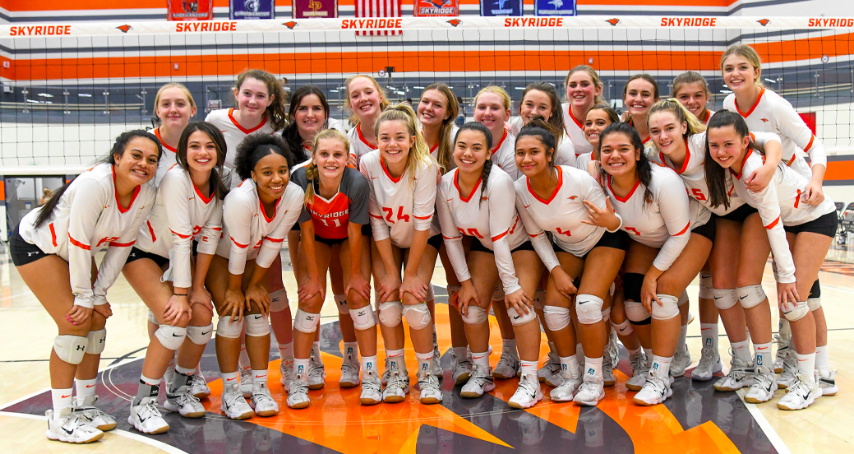 The Skyridge volleyball team swept Jordan 3-0 at home on Nov. 3 but was eliminated from the 6A state tournament in the second round on Nov. 4 at West Jordan as the Jaguars prevailed 3-2 after a spirited battle.

At West Jordan, the scrappy Falcons persevered for an extra-point victory 28-26 in the first set but dropped the second game 25-15. The teams flipped again in the next two, with Skyridge earning a 25-18 win in the third set but the Jaguars rebounding with a 25-16 triumph in Game 4.

The decisive set went back and forth, but the home team eventually pulled away to close out the match 15-10.

“I was proud of the girls for their competitive mindset,” said Coach Deanna Meyer. “They showed great team unity and effort in our last match. They played to the end with heart and learned the value of never giving up or giving in even when things did not go our way.”

Moore once again had an all-around productive night, notching 9 kills, 4 aces, 3 block-assists, 9 digs and 15 assists. Senior Ava Slaney closed out her prep career with 8 kills and 4 block-assists. Anderton tallied 6 kills and 4 aces and served for 14 points in this match after recording 10 the night before.

“We have a strong program and we went deep into our bench during the match as we needed everyone,” Meyer said. “The girls that came in really added momentum.” Those players included senior Alison Lambourn, sophomore Emma Grant, McGee and sophomore Cierra White.

The Falcons will return a lot of experience next year as many younger players got substantial varsity minutes this season.

Pioneer volleyball exits tournament after loss in 5A quarterfinals