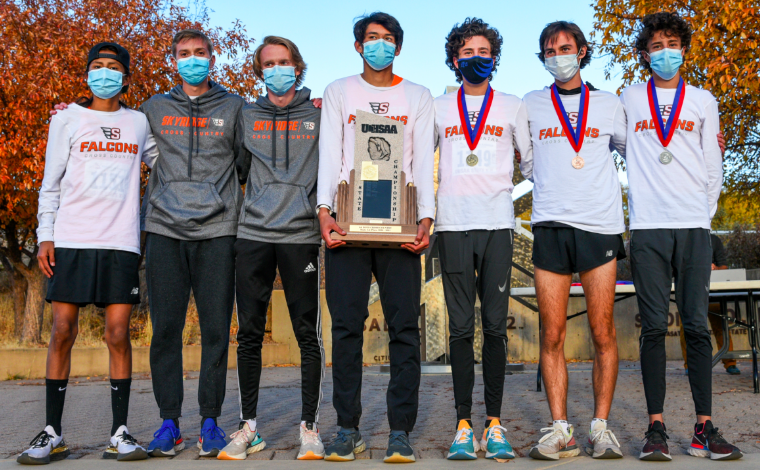 The Skyridge boys cross country team triumphed in a thrilling competition with Region 4 rival American Fork to capture the 6A state championship on Oct. 22 at Soldier Hollow in Midway.

It’s the first gold trophy for the Falcons in this sport and the second for the school in two weeks after the girls tennis team earned their title on Oct. 10.

Coming into race day, the Cavemen had won nine of the last 11 championships in their class and edged Skyridge in the divisional meet on Oct. 9, but the Falcons came out on top this time with a big boost from their top three runners.

After the first mile, brothers Creed and Davin Thompson were running literally neck-and-neck with junior teammate Seth Wallgren right on their heels as the three of them led the pack.

However, things got interesting about halfway through the course. At the end of the second mile, Creed had run the best split of the day for any 6A competitor, finishing the middle mile in 5:00.6 minutes and moving into the lead by 4.8 seconds.

Meanwhile, Davin had fallen to third behind American Fork’s Brayden Packard and Caveman Nathan Jaster had moved up to fourth with Wallgren trailing in sixth place.

In the final mile, Jaster summoned a tremendous kick to run the last leg 18 seconds faster than anyone else and passed Creed to earn the gold medal with a mark of 16:09.8

The Skyridge killer trio followed in order to get the next three spots. Creed took the silver at 16:20.4, Davin won bronze at 16:33.8 and Wallgren moved back up to come in fourth at 16:55.2, edging Westlake’s Jedidiah Megargel literally by a nose in a photo finish.

The Skyridge girls finished seventh in their race with 197 points. Lone Peak was the runaway winner with 29 points, followed by American Fork at 74, Layton at 105, Corner Canyon at 183, Riverton at 187 and Davis at 191.