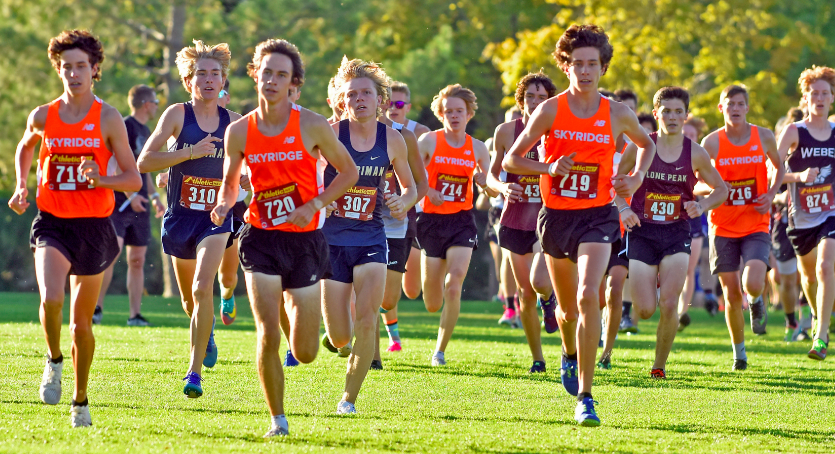 The Skyridge cross country team earned second place in the 6A Boys Section B race and finished third in the 6A Girls Section A event at the 5A/6A Divisional Races on Oct. 9 at Lakeside Park in Orem.

American Fork scored 39 and just edged the Falcons at 41. Skyridge claimed three of the top six spots including No. 1 but the Cavemen had all five of their team scorers place in the top 14.

The tight race should make for a thrilling competition at the state final Oct. 22 at Soldier Hollow in Midway.

Falcon senior Creed Thompson again crossed the finish line first at 15:10.0, 5.6 seconds ahead of the next runner in.

Junior Seth Wallgren came in third at 15:16.3, less than a second behind second place. Senior Davin Thompson was sixth at 15:40.8, only 1.3 seconds behind the fifth spot. Senior Kade Hansen was 15th and junior Seth Kjar was 16th to round out the counted scores.

The girls results weren’t quite as close, but they were still very exciting. Herriman was first with 54 points, followed by Layton at 62 and Skyridge with 87.

Sophomore Kylie Olsen was the top Falcon finisher, coming in ninth at 19:24.4. Sophomore Eliza Sandberg was right behind her at 11th, followed by senior Trina Fix at 16th, senior Annie Watson at 23rd and junior Maren Poll at 28th.