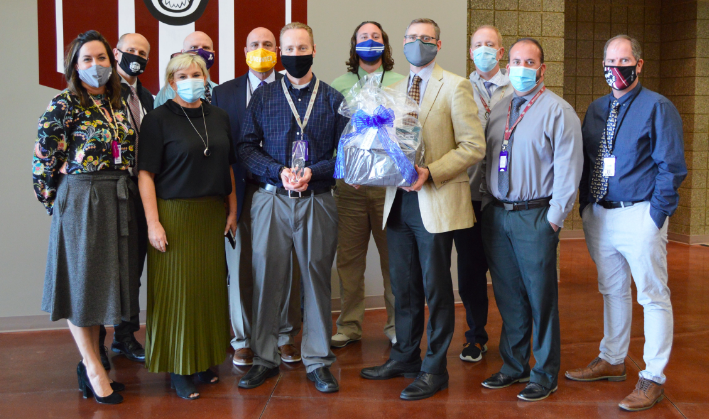 Each year the Alpine School District Foundation chooses ten educators from among the more than 4,000 in the district to receive the Accent on Excellence Award. On Wednesday, October 7, Jamie Alviso at Skyridge High School and Jordan Hadlock at Willowcreek Middle School were surprised during the school day with an engraved crystal trophy, a basket full of goodies and a check for $500 as winners of the Accent on Excellence Award for 2020.

The Accent on Excellence Awards honor some of the outstanding educators and employees who are exemplary role models and heroes for their students. Alpine School District Foundation and several local businesses partner together to recognize and celebrate the winners.

Jamie Alviso was in the middle of teaching her AP Chemistry class on October 7 when she was presented with her award. “One of the things we always want to do is honor the best teachers,” said Tyler Vigue, ASD Foundation Director. “I hope you recognize what a wonderful experience you’re having with this teacher,” Vigue continued, addressing the students.

After Alviso had been presented with her prizes, the students in her class gave her a standing ovation. “All of her athletes and my athletes want to take her class. She’s always thinking about them outside the classroom. It was just a matter of time before she was recognized like this,” said Jhoan Alviso, Jamie’s husband and a teacher and soccer coach at Skyridge. “She approaches teaching and coaching with the same mentality and both her athletes and her students do very well,” he continued.

A few hours later, Jordan Hadlock was called to the office at Willowcreek Middle School and presented with the Accent on Excellence Award. Both Hadlock and Alviso were notified of their big win in May 2020 but getting all the goodies from ASD Foundation donors and the trophy in the middle of a week in October was still a fun surprise.

At the time he won the award last May, Hadlock was teaching Health and PE at WMS. This school year he is a Professional Learning Communities (PLC) Coach, providing real-time learning to teacher teams at the school that join the school’s vision with individual teacher goals.

“The potential to affect change is dramatic in education, especially at the junior high level,” said Hadlock. Both of his parents were educators, and he has been teaching for ten years. “The students are trying to figure themselves out, they’re still moldable. Teachers have a chance to affect their students for the rest of the student’s life. It’s not just about the content we teach, it’s about character. They’re seeing what they can become from the perspective of someone besides their parents,” Hadlock continued.