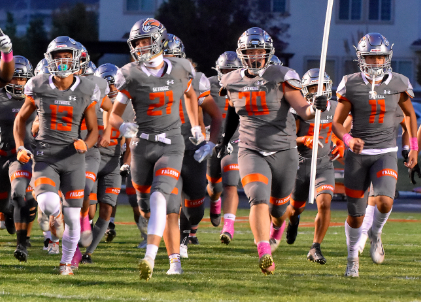 The Skyridge football team had undefeated Corner Canyon exactly where they wanted them, down by double digits heading into the fourth quarter of a justifiably hyped Region 4 battle on Oct. 8.

But there’s reasons why the Chargers had won 34 straight games coming into this one. National No. 11 Corner Canyon rallied behind their outstanding senior quarterback Jaxson Dart, scoring twice in the final eight minutes to defeat the Falcons 29-26 at home.

The Falcons controlled the field for most of the game, thanks in no small degree to a pair of their stellar offensive players. Junior running back Jeter Fenton led the way with 31 carries for 144 yards.

Sophomore quarterback McCae Hillstead returned from a late-game injury at Lone Peak to match Dart stride for stride. Hillstead was 17-of-21 for 256 yards and three touchdowns while also rushing for one more and showed his competitive mettle on numerous occasions throughout the contest.

Junior tight end Teagan Calton was a battering ram all night in the run game and scored the first touchdown with a 25-yard catch. Senior wide receiver Mitch Adamson added the final Falcon score of the night with a three-yard catch late in the second quarter.

Senior center Dallin Richards said, “In all we knew that the Chargers were going to be a good team. We came out and battled and I feel like we played really well. We had a couple missed assignments that took the game away from us.

“We had three touchdowns that we just left on the field,” he continued. “If we would have completed those it would have been a different outcome. We had one that was like a fumble out of the endzone that didn’t quite get in position and another one where the kid wasn’t set. Little things like that will kill us. If we would have gotten those, we could have won this game.”

Skyridge Head Coach Jon Lehman said, “I’m proud of the way these guys fought tonight. We just have to finish. We put ourselves in good position and I liked how we moved down the field at the end of the game with the game on the line. That showed a lot of guts and great execution.

“This one went their way tonight.” He added, “I love how they fought when they got into the red zone defensively. We made a couple of stands and I love how aggressive we were offensively at different times and really moving the ball.”

The Falcon defense managed to force turnovers and kept the Charger offense in check during the first half. The defense put pressure on the opposing quarterback throughout the game and limited their rushing attack with gang tackling and flow to the ball.

“We have to come back working for the next one,” said senior safety Sawyer Winward . “Everyone played outstanding tonight and no one gave up. Everyone put in the work and kept playing till the end. We came out tonight lit up with a fire.”

Launoa added, “We did well during the first half. We came out hard and fighting. I feel like we lost all our energy in the second half. Up front we did good with our blocks and reads and we were able to execute.”

Skyridge nearly pulled out the win with 1:06 left on the clock as they quickly marched down the field with a first-and-goal situation from the 6-yard line and eight seconds remaining. Hillstead opted to scramble towards the end zone but was stopped three yards short as time expired.

Still ranked among the state’s elite, the Falcons were 7-2 as they prepared for the last regular-season game against Westlake on Oct. 14.