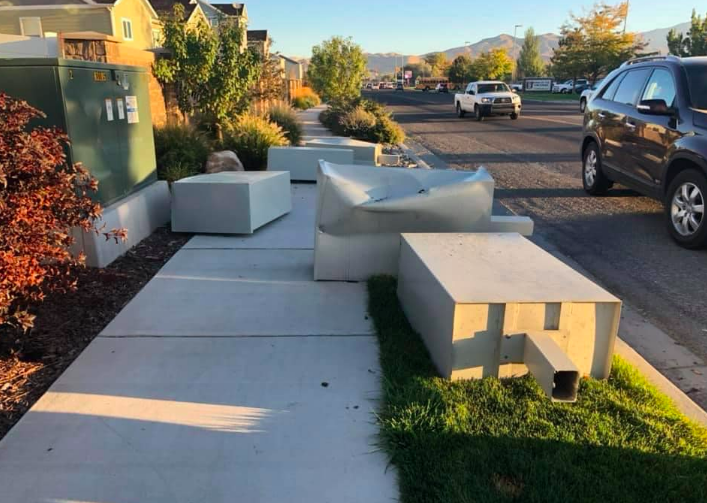 Lehi mail carrier Warren Henrie was doing his job delivering mail to a cluster-box unit (CBU) on 2300 West, across the street from Willowcreek Middle School, on May 26. An impaired driver struck Henrie, pinning him under the driver’s vehicle. After eight surgeries, one to amputate his left leg below the knee, and five weeks in the hospital, Henrie is pre-drafting legislation for a statewide ordinance for location and orientation of CBUs.

“When I was laying on the ground under that car, I made a decision that no matter what my injuries were, I wasn’t going to let this ruin me. I want something good to come out of this,” said Henrie, who is home from the hospital but not back to work yet. He contacted his college friend, Utah County Commissioner Bill Lee, to get advice on where to start on a city or county ordinance. Lee suggested involving state senator Jacob Anderegg, who immediately came aboard. The plan is to have Henrie’s bill ready for the January session.

On September 30, not long after middle school students had made their way home, the CBU on 2300 West was struck by a car again, toppling and damaging the entire unit. No one was injured this time, but the incident left no doubt that something needs to be done. “I think it’s clear that the CBUs shouldn’t be in park strips, even if that is more convenient,” Henrie said. He pointed out that the CBU on 2300 West could be placed with its back to the fence on the other side of the sidewalk. “We need to do what makes sense neighborhood to neighborhood,” he said.

“Contractors buy and place the CBUs based on where the majority of the residents want it, but that’s the end of the contractor’s involvement. If there is an HOA, they take over maintenance of the unit. The USPS doesn’t own the unit and they don’t have a say in where it’s placed. They are responsible for the mail until it’s in the box. The city owns the park strip, but residents have to maintain them. We need to find a way for all of these entities to come together for the safety of mail carriers and adults and kids getting their mail.”

Henrie predicts individual mailboxes will continue to be replaced by CBUs in the decades ahead. Postmaster General Louis DeJoy, who was appointed in June 2020, has committed to creating a long-term, viable operating model for the Postal Service, and CBUs help mail carriers get their work done quickly.

“We can’t just keep doing what’s been tradition. We’re a bigger city now. We need to make some adjustments to make it safer,” said Henrie. “I remember when we moved here 25 years ago, 2300 West was a dirt road and now it’s a major thoroughfare. I loved Lehi then, and I love it now. We might be inconvenienced a little by having to walk to get our mail, but if it means keeping people safe we should do it.”

Henrie is waiting for his bones and skin to heal so he can be fitted for a prosthetic leg. “When I can wake up, put on my prosthetic by myself and stand up on my own, it’s going to be a great day,” he said.