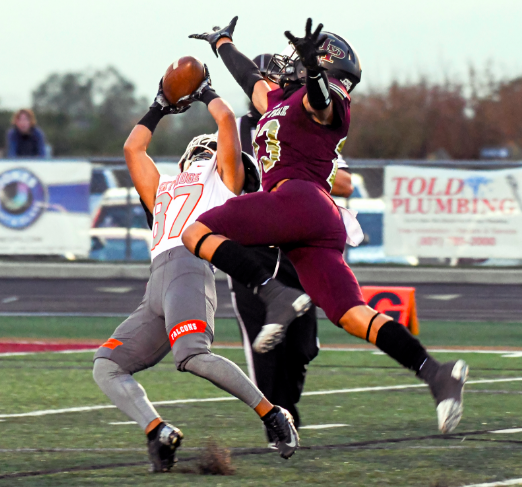 The Skyridge football team lost their quarterback and the game in a Region 4 grudge match on the road at Lone Peak 37-20 on Oct. 2.

The Falcons jumped out early with a 7-0 lead in the first quarter. However, after four turnovers including three interceptions and a fumble, they found themselves behind late in the fourth quarter of the game.

The Knights proved to be a challenge for the Falcons with perfection in their kicking game by Benjamin Miller, scoring three field goals in the first half of the contest.

Lone Peak’s domination on defense was boosted by John Henry Daley with 10 tackles and 4.5 sacks. His relentless pass rush disrupted the Falcon offense time and time again throughout the game.

Skyridge put points on the board first with a three-yard reception by junior wide receiver Jack Hadfield. Senior receivers Mitch Adamson and James Palmer also made some great catches in an effort to keep the Falcons in the game.

Hadfield scored the second Falcon touchdown with a 20-yard grab in the third quarter. Sophomore quarterback McCae Hillstead played well under the constant pressure of the Knight front seven. Hillstead was injured in the second half and was replaced by backup senior Kiai Keone, who connected with Palmer for a 28-yard touchdown late in the fourth period.

“Obviously this is not the outcome we wanted,” said Falcon senior linebacker Colby Dulle. “Lone Peak is a very good team and we got punched a couple of times and couldn’t respond. Lone Peak had momentum going on and they were just more physical than us.”

The Falcon defense put up a good fight despite being challenged by short fields and a substantial disadvantage in the time of possession.

Lambert said, “The game was a good wake-up call for our team. I feel like the team as a whole was starting to get complacent.

“We didn’t practice as intensely as we usually do and we didn’t start the game itself with a lot of passion,” he continued. “We made a lot of mistakes with assignment, alignment and execution early that really hurt us.”

Lambert added, “Lone Peak took advantage of turnovers and great field position to go down and score. That was a tough game to play defensively, but we will refocus on doing the little things right and be okay.”

The loss places Skyridge at number four in the state 6A RPI rankings with a record of 7-1 as they prepare to take on juggernaut and returning state champion Corner Canyon on Oct. 8.

Hillstead’s availability for this week’s game was unknown at press time but he is expected to return at some point this season.

Lehi prevails over Alta in nail-biter