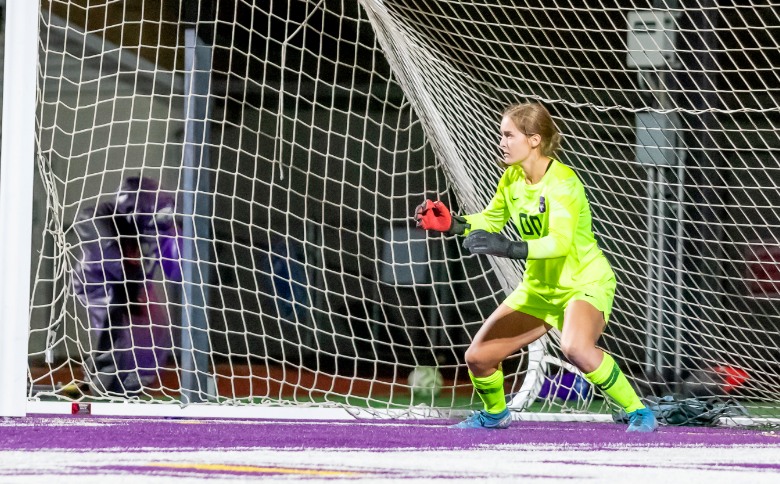 In their only game of the week, the Lehi girls soccer team won big at home defeating Timpview 3-0 on Sep. 24.

After a bye two days earlier, the Pioneers came out strong and dominated the Thunderbirds in all phases of the game.

Lehi junior midfielder Ally Dahl scored on a set piece from 25 yards out in the 29th minute to put the Pioneers on the board first.

This is the second game against Timpview this season during which Dahl converted on a free kick as she scored the only goal in Lehi’s 1-0 victory in their first match on Sep. 1.

Pioneer senior forward Kennedi Schmidt continued the scoring after the break in the 53rd minute. The Timpview keeper came out to challenge, but Schmidt was able to slip the ball past her and into the back of the net. Schmidt also had an assist in the contest.

With 10 goals so far this season, Schmidt is the second-leading scorer in Region 7 and holds the 10th position in 5A. Teammate sophomore Stephanie Roper is in the fifth position in the region with six goals.

Lehi’s final tally came in the 67th minute when sophomore forward Sarah Ballard scored on a left-footed shot from 6 yards out. Ballard frustrated the Thunderbird defense with her runs in the second half. She was fouled three times, and two of them resulted in yellow cards.

“The offense is improving daily and I think they will continue to get better,” said Coach Tim Graham. “We worked on being creative and combining in the final third all week and it really paid off against Timpview.”

For the fifth time this season, the Lehi defense shut out the opposing team. “We defended very well as a unit against Timpview. I feel that communication and focus has been the key,” said Graham.

With senior defender Claire Robbins out for the season, Graham has shifted some of the players into different positions. “Ady Miller and Kailey Robertson are really doing well and have made the position changes seamless. Their confidence in each other has been huge,” the coach said.

There was some drama late in the game when Timpview was awarded a penalty kick. However, they were unable to convert. Pioneer sophomore goalkeeper Hayley “Jo Jo” Ogden has only allowed one goal on a penalty kick out of five attempts this season.

She is the top goalie in Region 7 with 3.7 saves per game and the third-ranked keeper in the 5A classification.

“Jo Jo is just doing her thing in the net. She has really focused on her technique and really has become a student of the game. It has been super impressive to watch,” Graham said.

After one more week of league games, the first round of the 5A state playoffs begin on Oct. 8.

Although Lehi is tied with Alta at 8-2, the Hawks own the tiebreaker. To regain the top spot in the region, the Pioneers need 3-7 Orem or 7-4 Timpanogos to beat the Hawks, and they need to take care of business against Mountain Ridge and Mountain View.

Lehi deficit against Timpview proves too big a hill to climb