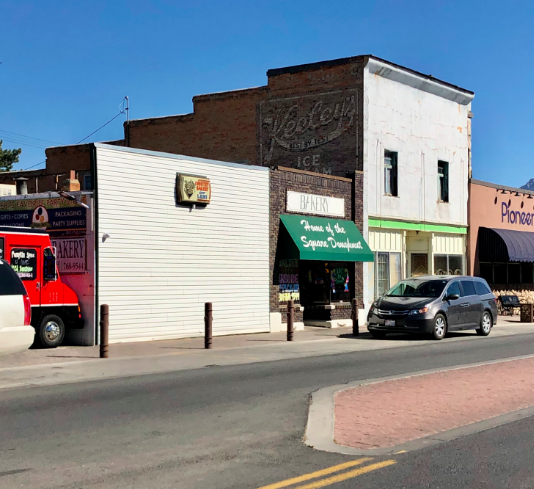 The Lehi City Planning Commission held their regular meeting in City Council Chambers on Thursday, Sept. 24. Commissioners sat six feet apart and wore masks, and at least one commissioner attended the meeting remotely. A proposed expansion of the iconic Lehi Bakery was on the agenda, stirring up recurring Main Street parking concerns and in-person objections from two close neighbors.

David Doty, the owner of Lehi Bakery, submitted a request for approval of a concept to expand the bakery on 172 West Main Street. Doty proposed to tear down the existing building and replace it with a three-story building with two storefronts, one for the bakery, and one for a take-out pizza restaurant. Both establishments would use the same machinery and space for food production at different times of the day. The second floor would be commissary and storage space for the bakery, and the third floor would be office space, restrooms, and a break room.

Doty plans to keep the historic “Bakery” sign as well as the green awning with “Home of the Square Doughnut.” He has not commissioned architectural plans for the project, waiting for the Planning Commission’s approval to proceed. Doty spoke to the commissioners for several minutes but did not have a microphone and couldn’t be heard on the meeting’s video feed.

During the public hearing, David Hoyt, who lives near the site, summarized four pages of comments he had submitted previously by email to the commissioners. “I’m asking that you don’t give final approval for the Lehi Bakery expansion project until David Doty presents a more complete concept and does due diligence for this committee and the Main Street Historic Corridor community,” said Hoyt.

In Doty’s proposal for the expansion, he predicted parking needs would not be affected significantly. In the concept, he suggested removing seven parking stalls on the west side of the current building, spaces that are typically used by bakery employees now. Doty suggested that he continue to lease stalls in the lot west of the bakery from Brian Brown, of Parker Brown Real Estate, and rent stalls from Lehi City in the Legacy Center overflow parking on 100 West on the same block.

“The parking lot west of the Lehi Bakery will be developed by Brian Brown. Leasing parking spaces from Brian Brown should absolutely not be factored into this proposal,” Hoyt said, adding that the Legacy Center overflow parking lot on 100 West is too far away for viable bakery customer parking.

In his rebuttal document, Hoyt wrote that Lehi City should add a timeline on highly visible projects to avoid “creating a public blight and often dangerous area.” Hoyt referenced the Brian Brown project on Main Street and Center Street, the former Porter’s Place restaurant, that has made slow progress since Brown purchased the property from Lehi City in June 2018.

The owner of the building east of the Lehi Bakery, John Thornton, also attended the meeting to comment on the record. Thornton has used the space for a library, art studio, and storage for his inventions. “I don’t like that my building was listed as ‘abandoned’ on the last proposal to the Planning Commission,” Thornton remarked.

While Thornton was concerned about parking for an expanded bakery, he was more worried about its historical nature damaged by new construction. “I’m passionate about the Keeley’s Ice Cream sign on the side of my building, and that would be covered up,” Thornton said.

David Doty responded to Hoyt and Thornton’s concerns, but once again did not use a microphone and couldn’t be heard on the video.

“This is in the very early stages of planning. We’re looking at this from a 30,000-foot level to identify potential problems,” explained Planning Commission Chair, Matt Hemmert.

“I’d probably be okay with the expansion, but there’s too much we don’t know. I’d like to table this until we have a more detailed concept,” said Commissioner Jared Peterson.

“They’ve given us a good description, and I can visualize it in my mind, but I think we need more to go on,” added Commissioner Brent Everett.

“He could pay for renderings and come back to us and have to change everything. He’s described how tall the building would be, the square footage, the parking, the general elevation. To me, there’s enough here to test the viability,” said Commissioner Abram Nielsen. “At this point, we’re just saying that conceptually it meets code. People are hesitant to invest in downtown Lehi. I don’t want to chase them away.” Nielsen was not concerned about parking, referencing a study that showed more than enough parking within an eighth of a mile of the Main Street businesses.

“It’s projects like this that could move us to the next phase of revitalizing downtown,” said Commissioner Scott Bunker.

The motion to approve David Doty’s concept to expand the Lehi Bakery passed with a vote of 5-2. Commissioners Everett and Peterson voted no.

The Planning Commission gave unanimous positive recommendations and approval for the following items at the Sept. 24 meeting:

– Lehi City’s request for a Development Code amendment to Chapter 20, Home Occupations, clarifying the storage of vehicles as a prohibited home occupation.

– Vinyl Industries request for a conditional use for an 8-foot fence at 844 North 1700 West.

– Holiday Oil’s request for a concept for a location at 1225 West Sandalwood Drive.