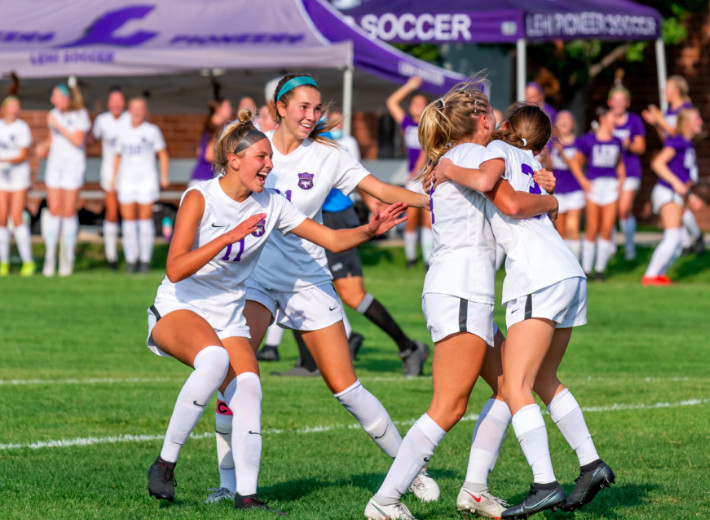 Both of this season’s matches between the Pioneers and Tigers have gone into overtime. “Orem is a scrappy, hard-working team. They are well coached and just don’t quit. They are always a tough matchup for us,” said Coach Tim Graham.

The Pioneers prevailed at Orem 3-2 on Aug. 20 thanks to outstanding offensive plays made by Savannah Jones, Ally Dahl and Stephanie Roper.

This time, senior forward Haley Martin was the player of the game for Lehi. The Pioneers had several quality chances to score in the first half, but were unable to put the ball in the net.

Martin scored a goal in the 53rd minute to tie the game. Fellow senior Kennedi Schmidt carried the ball from near the Lehi goal to midfield, where she played a pass into space.

Martin ran onto the ball, dribbled to the top of the box and beat the keeper with a powerful line-drive shot.

After the score remained tied 1-1 at the end of regulation, the game went into extra time. With 2:14 left in the first overtime period, Martin scored again, winning the game for the Pioneers.

The play started when sophomore goalkeeper Hayley Ogden collected the ball in the box and drop-kicked it beyond midfield. The ball landed untouched on the turf and took a high, long bounce.

An Orem defender attempted to clear the ball by heading it, but Martin pressed forward, chesting the ball out of the air into open space. She ran onto the ball in the middle of the field, dribbled for 15 yards and shot from 24 yards out.

The Orem keeper came off her line to challenge and was able to reach above her head to slightly deflect Martin’s shot. However, the ball continued on its path into the back of the net.

“Haley Martin never stops working. She has a never-die attitude with a motor that doesn’t quit,” Graham said. “She was able to find space behind the Orem defenders twice and bury the ball in the back of the net.

“Haley has been showing that hard work pays off for three years now and we are so grateful to have her on the team,” the coach added.

The Pioneers traveled to Sandy for the rematch with the Hawks. Alta is the only team in Region 7 to defeat Lehi this season.

During the first half, neither team was able to capitalize on multiple scoring opportunities.

For most of the second period, the Hawks dominated possession. Lehi’s energy and drive had abandoned them. “I think we were mentally drained from the Orem game and it truly showed against Alta,” Graham said.
The Pioneers went down 2-0 with 17 minutes left on the clock. However, things were about to get interesting.

With 10 minutes remaining, the Pioneers were awarded a corner kick. Senior Kennedi Schmidt jumped higher than two Hawk defenders who were marking her to head the ball down into the goal.

After Schmidt’s score, Lehi found new life. The Pioneers pressed hard, creating scoring chances to tie the game. They had the momentum.

With just over one minute left, Lehi had a throw-in deep in their offensive third. Hurried substitutions were made including bringing senior captain and flip-thrower Melody Jensen into the game.

Jensen performed a perfect front walkover and flung the ball into the box. The ball bounced across the face of the goal until junior defender Savannah Jones redirected it toward sophomore forward Sarah Ballard, who side-volleyed it into the net from eight yards out.

The Lehi players, coaches and fans erupted in celebration. For the second consecutive game, it appeared that the Pioneers had produced an amazing comeback.

The euphoria continued until a linesman informed the referee that Lehi had 12 players on the field. During the final Pioneer substitution, two players came onto the field and only one went off. The goal was waved off and Alta was thus the winner.

At 7-2, the Pioneers are still on top of Region 7 with a half-game lead over the Hawks with three games remaining in the regular season.

Lehi‘s Robbins is a force on and off the field