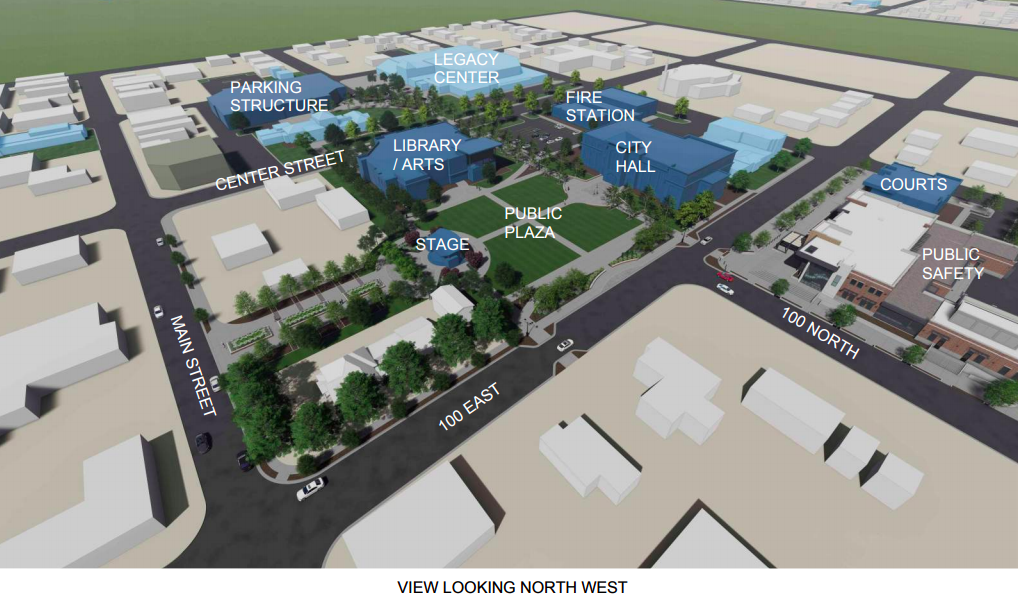 On Sept. 8, The Lehi City Council held its first in-person meeting since the Coronavirus pandemic began in March. With all council members in attendance, a new socially distanced seating arrangement was implemented with six feet between seats on the chamber bench. City staff moved to a side table, and only four members of the public were allowed inside the chambers at a time. Each participant was also required to have their temperature checked by a Lehi Police Office before entering the chambers.

The primary order of business during the Tuesday night meeting was the adoption of a new Civic Center Master Plan for downtown Lehi. The plan was presented by Curtis Miner Architects and would increase the current 214,000 square foot Civic Center Campus by 113,000 square feet. Along with the increased workspace, the employee count for Lehi City is projected to increase from its current 219 to a potential of 350 by 2060.

To begin the presentation, Curtis Miner opened with the six elements for Lehi City’s vision:

1. Revitalize historic downtown Lehi by providing a clear vision for the city campus and its influence on future downtown development. This plan would include a major investment by the City intended to enhance the quality of life for residents and strengthen businesses in the area.

2. Begin the project with the end in mind.

3. Enhance the pedestrian experience and walkability of downtown by potentially closing some streets and increasing sidewalk and pathway connectivity throughout the downtown campus.

4. Design with a consistent theme so the campus feels cohesive and reflects the character of historic Lehi City and recent growth areas.

5. Focus the project on the civic campus with limited impact to adjacent commercial and residential areas.

6. Understand the importance of phasing and timing of the project to allow the City to realize costs and budget appropriately.

Curtis Miner, who presented to the council on behalf of his firm (which designed the nearly completed public safely complex), emphasized that the new city campus design would incorporate and showcase Lehi’s longtime heritage in both concept and material use.

The plan includes a six-phase buildout with an anticipated 20-year timeline.

Phase 2: New two-story courthouse and new fire station to be completed by 2024 with a cost of $10 million.

Phase 3: New two-story library and arts center, along with a remodel of the Literacy Center, to be completed by 2030 and would cost $17 million.

Phase 4: The new center plaza and performing stage to be completed by 2032 and would cost $1.6 million.

Phase 5: Relocate the Senior Center and remodel the Legacy Center to be completed by 2034 and would cost $8 million.

Regarding funding the entire project, City Manager Jason Walker said, “It would be multiple bonds over multiple years.”

“Is there a commitment we are making here?” City Councilman Chris Condie asked regarding adopting the Civic Center Master Plan.

“There is no commitment, this isn’t binding,” reassured Walker.

Councilman Mike Southwick motioned to approve the new master plan and the motion was seconded by Koivisto. Voting was unanimous in support of the plan.