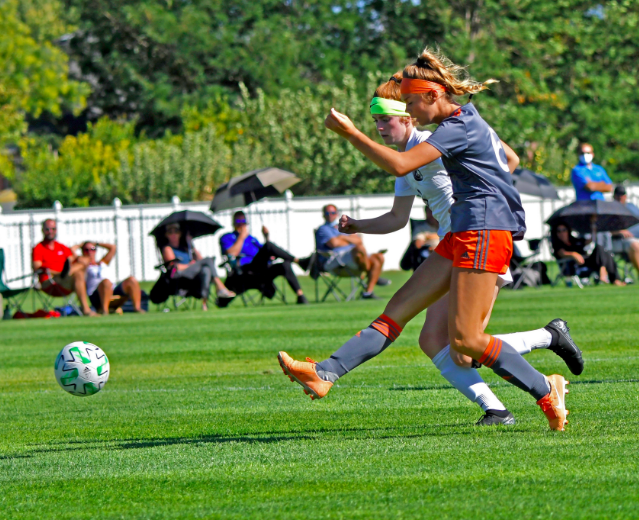 The Skyridge girls soccer team suffered a pair of losses in Region 4 play last week but showed good progress in pushing through to a shootout in one of them.

The Falcons fell at Lone Peak 2-0 on Sep. 1. On Sep. 3, they played host to Corner Canyon, which had just dealt top-ranked American Fork its first loss of the season two days earlier. The teams dueled through regulation and two overtimes before the Chargers edged Skyridge 4-3 in a shootout.

Coach Jerry Preisendorf praised his team’s efforts in this match. He said the girls out-possessed the opponent by a ratio of 61-39 percent and battled back after falling behind.

Corner Canyon got on the board early with a goal in the 14th minute, but it remained 1-0 at the break. The Chargers then added to their advantage with a second score in the 59th minute, but then the host squad came roaring back.

Just three minutes later, senior Maddie Snyder found the target for the home team, and senior Ellie Nelson pulled the Falcons even with a penalty kick goal in the 68th minute.

Neither team was able to break the impasse after playing more than 30 minutes longer, bringing on the tie-breaker.

Nelson tallied the first goal for Skyridge in the shootout, but Corner Canyon got the next two. Snyder and freshman Amanda Caswell each subsequently hit the net for the Falcons, but the Chargers followed them with their own makes to pull out the narrow win.
“I feel that we made a good step forward,” Preisendorf said. “We showed a lot of heart by coming back from a 2-0 deficit, especially against one of the teams leading Region 4.

“Even though the win would have been great because it would have kept us in the race, I feel that we are making progress and showing that we will not roll over,” the coach continued.

“This game demonstrated that we are a good team. Our record doesn’t show it, but in the end I think this effort will prove to have moved us in a good direction,” he concluded.