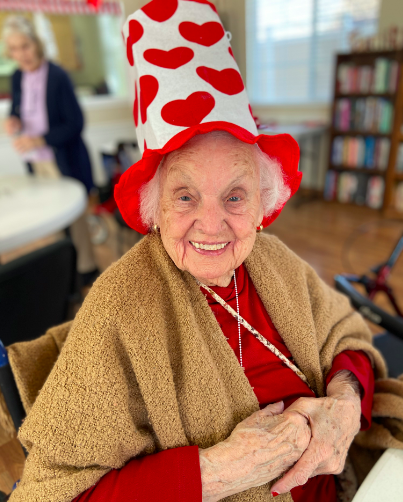 Lehi’s Mary Lewis is celebrating a huge milestone this week–she is turning 100. She officially becomes a centenarian on September 7 but is still young at heart. She has lived a life full of traveling, children, and roller skating.

Lewis was born in Logan, Utah on September 7, 1920, in her grandmother’s back bedroom of their family home. She was the oldest of four children and spent her childhood years in Lewiston, Utah. Lewis would travel to Logan often though for two main reasons. One, to visit her grandparents, who owned a grocery store on Logan Center Street near the canal. Her grandparents lived on the same property as the store and loved to have grandchildren visit. Lewis also had another reason to visit Logan frequently, to roller skate at the local roller rink with her friends.

After graduating from North Cache High School in Richmond, Utah at age 18, Lewis met and married Clyde Beecher. The happily married couple moved to Salt Lake City, where Clyde had a job promise with a friend named Lynn Wilson. Wilson and Beecher made and delivered tamales and meat pies to grocery stores in the greater Salt Lake area.

Lewis mothered four beautiful children, Marilyn, Bob, Sue, and Debbie. Unfortunately, Debbie passed away three years ago due to ovarian cancer, leaving behind her husband and their four children. Lewis has a total of 25 grandchildren who visit her often at the Abbington Manor assisted living facility where she now lives in Lehi.

Mary and Clyde lived a happy life together before he passed away several years ago. Mary turned lemons into lemonade and for five years, used her time to travel and see the world, mostly throughout Europe. Lewis says that her favorite tours were with tour guide Brian Judd, and she often followed his program around to different destinations.

Five years after Clyde’s passing, Mary attended her 55th high school reunion and reconnected with an old high school boyfriend named Clayton Lewis. Clayton had just lost his wife, and the two began dating and eventually married. “I wanted to show him the world,” said Lewis, “but he only lived a year and a half after we got married.”

When asked what the greatest lesson she has learned in life, Lewis replied, “Be happy, work hard, and take good care of your kids.”

Lewis’s mother found out that she was pregnant with Mary at the tail end of the Spanish Influenza pandemic. Lewis will turn 100 on the 7th of this month. Now living through the COVID-19 Pandemic, her favorite pastime is seeing her family, which, luckily, she gets to do often by following social distancing guidelines. She has a lively spirit, a love for Bingo, and 25 grandchildren that keep her young and smiling.