Lehi volleyball falls at home, wins on the road 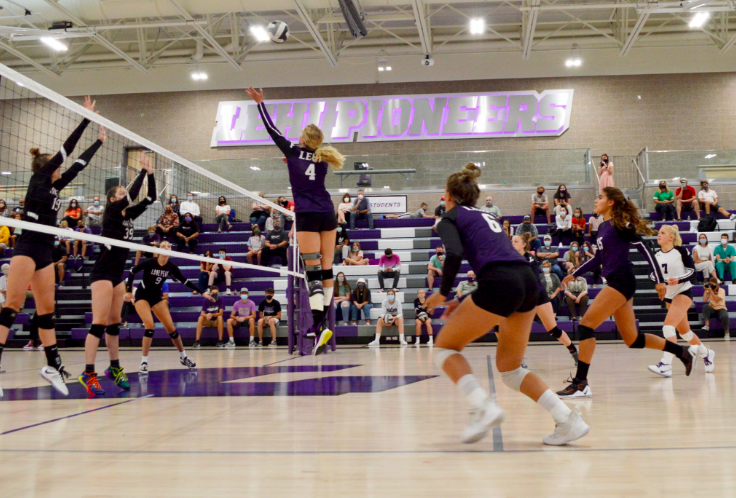 The second week of the volleyball season looked much like the first for the Lehi girls with a loss at home to Lone Peak 3-0 on Aug. 25 and a 3-1 win at Corner Canyon on Aug. 27 in non-region action.

The Pioneers played the match in front of a mask-muffled hometown crowd. The Knights led the entire first game, with two net-drop serves from junior outside hitter Avery Shewell giving Lehi hope for a comeback toward the end of the set. Lone Peak still managed to pull it out 25-22.

The Pioneers jumped to an early advantage in the second set and exchanged leads with the Knights several times, but Lone Peak took the win 25-22 again. Lehi dropped the third set as well, 25-20.

“It really came down to execution today. I liked that we were more aggressive serving, but we needed to find the open seams more,” said Coach Kolton Rader. “I thought maybe we’d already learned this lesson that if we don’t play hard, we lose, but I guess not.”

A different Pioneer team came to play the Chargers in Draper.

Before the varsity games, the junior varsity played with the names and numbers of two of their teammates who were unable to play on Thursday because of COVID-19 exposure. They will miss four games and two weeks of school, as per Alpine School District quarantine guidelines.

The Chargers had an early Senior Night on Thursday for their varsity players. Before introducing their own seniors, members of the Corner Canyon team honored LHS seniors Ashlin Burton, Ashlin Willes, Haylee Holker, Macey Faddis, Ashlyn Barry, and Marlee Lotaki with candy leis and a round of applause.

In the first set against the Chargers, the Pioneers started out cautiously and Corner Canyon fed off the eager home crowd. The Chargers remained stuck at 24, however, while Lehi flipped a switch and went on a 5-0 run.

Junior libero Bailee Holland lit the fire in her teammates with 30 serve receptions and 19 digs.

“They started thinking less about what was going on and more about what they could do to help the team,” said Rader.

“By the time the second set had started, we were confident in each other and our game plan. When we play to win and go out there with confidence, I think we have a great chance at beating anybody out there,” he continued.