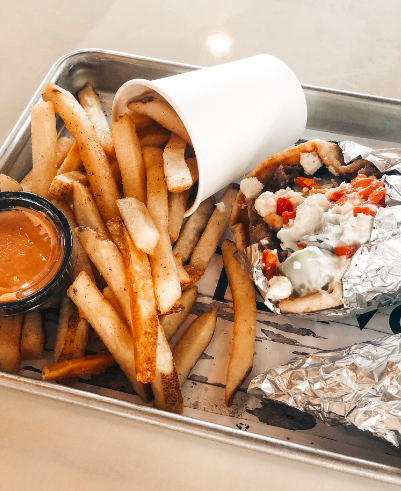 Lehi residents often complain about not having enough small family restaurants with unique tastes. Family owned and operated, Padeli’s restaurant by Thanksgiving Point is changing that, bringing tried and true recipes to the table.

Padeli’s is a spin-off of the Paulos family’s original restaurant, Greek Souvlaki, which opened 47 years ago in downtown Salt Lake. Lee Paulos has been called “the godfather of Utah Greek food” as the first person to bring the gyro into Utah. Originally from the Greek village of Tripoli, Paulos found amazing success with his family-created recipes. Twenty-one years ago, when Paulos’ three sons, Chris, Leo and Frank, were old enough to join the family business, the brothers began to open more restaurants together.

Padeli’s is a modern take on classic Greek favorites like gyros, baklava and more. Padeli is the Greek pronunciation of Lee Paulos’ name. With Leo Paulos as the head recipe creator, the restaurant concept is based on customization, with every ingredient visible to the customer for easy ordering. Lehi is the second Padeli’s location, with the first in Salt Lake and hopefully more to come. Chris Paulos, one of the managers at the Lehi location, called the restaurant “the Greek version of Chipotle,” with heavy and light options for every appetite.

Lee Paulos, who passed away a few months ago, was proud to see his sons continue the family restaurant tradition under his name. Chris Paulos recalls his dad sitting on the patio of the restaurant, just soaking it all in and watching as years of his hard work manifested in his children’s lives. On working with his brothers, Chris had nothing but positive things to say. “Without each other, none of this would have happened,” Chris says. Chris also remembers the family’s “we made it” moment when their Greek Souvlaki airport location first opened. “When you are creating something fun,” says Chris, “you have a really good chance to succeed.”

I had the chance to try a few of Padeli’s best-sellers, including a lamb and beef gyro, a spinach pie, and the house-made baklava. Each bite was a new and exciting explosion of flavors, with a creamy tzatziki sauce and fresh cucumbers and tomatoes bringing a fresh and tangy taste to the seasoned meat and crisp pita. As a personal fan of baklava, I was excited to see how Padeli’s compared to the authentic desserts I had tasted on my study abroad in Athens. The sweetness of the syrup with the thin layers of phyllo dough baked to perfection blew me away and were unlike any dessert I have had in years.