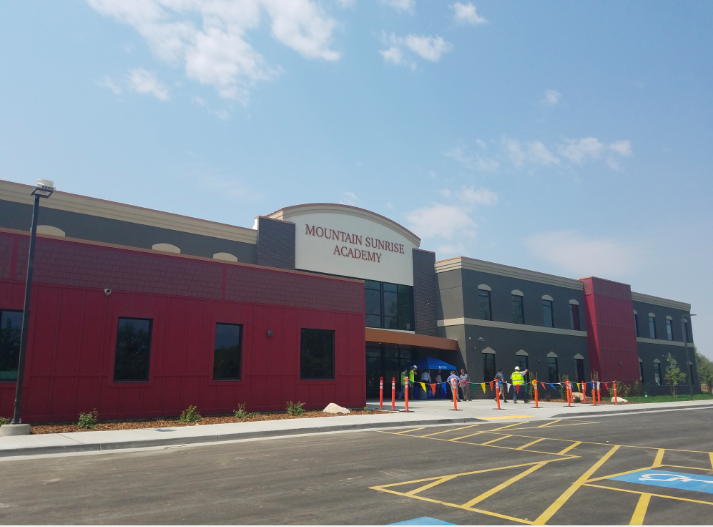 A century after the first Waldorf Education school opened in the middle of a global pandemic, Utah County has one of its own.

Mountain Sunrise Academy, Utah County’s first Waldorf Education school and the second of its kind in Utah, celebrated its grand opening Aug. 22 with a crowd of supporters amid parallels to the model’s inaugural school.

“I am excited we are bringing this together here,” said Tim McGaughy, the chair of the school’s governing board.

The public charter school, located on the border of Saratoga Springs and Lehi, has an enrollment of about 400 students for its first year, with some seats still available in certain grades. Kindergarten through sixth-grade students currently attend the school, with plans to add a seventh grade next academic year and an eighth grade for the school’s third year. After adding the eighth grade, the school will have a total cap of 500 students.

The school seeks to fulfill its mission of educating the “head, heart and hands” of its students while teaching creativity, collaboration, communication and critical thinking. The grounds include a garden, gathering spaces and a culinary kitchen.

Students keep the same teacher as they advance through the grades and learn through work, play, outdoor classrooms and arts integration.

The school hopes to give students needed skills, while building grit and resiliency.

“We are excited to give children this opportunity to serve in the future,” said Krystelle Rose, the school’s executive director.

Rose first learned about the Waldorf model in 2004 and has been actively involved with bringing it to Utah families. Wasatch Charter School, Utah’s first Waldorf school, opened in Holladay in 2016. Treeside Charter School in Provo is Waldorf-inspired.

Rose began the process of creating Mountain Sunrise Academy in 2015. The Utah State Charter School Board approved the school last year, and construction began in January.

“It’s been a dream of mine for a long time,” Rose said.

“I think this is a movement that will continue to grow,” she said.

The school is working toward the multiyear process of achieving accreditation from the Alliance for Public Waldorf Education.

During the grand opening, Rose spoke to an audience of more than 100 people about the importance of stories to education. Younger students will read fairy tales, while older students will use resources like biographies to learn about history.

The school’s design includes nods to its mission to use nature to educate students. The four elements are represented in its entranceway, while natural light and bright colors are used throughout.

Rose wants the school to feel like a home and gathering place.

“We want it to be beautiful and full of light and life and connection,” Rose said.

Blaire Watanabe, who has a first- and a third-grader attending the school, was attracted to the use of a kitchen, garden and integration of the arts.

She has previously homeschooled her children.

“I always love the idea of education that is well-rounded,” Watanabe said.

The school’s vision will build the city and community, said Ryan Poduska, a member of the Saratoga Springs City Council, in a short speech.

“It’s fantastic that we have these choices to come together in unity,” he said.