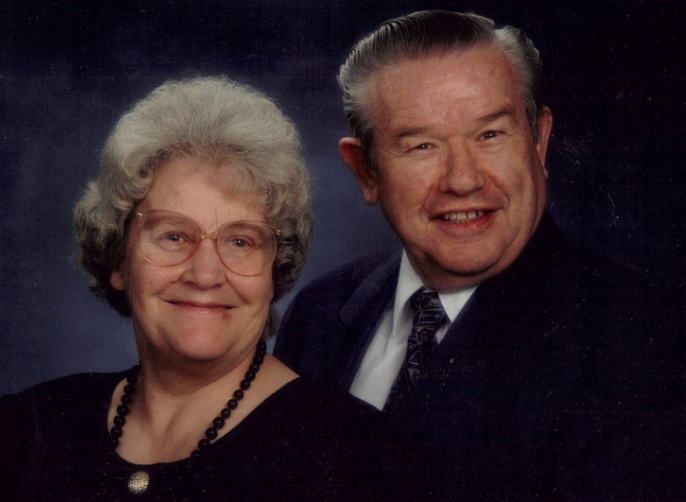 Arden and Cheryle Tuckett, the original owners of the Lehi Bakery, spent much of their lives bringing joy to the community with their tasty baked goods, including the infamous, Square Donut.

For more than 20 years, Arden and Cheryle worked together not only to maintain their business but to benefit the community. They used their bakery oven to cook turkeys, Cornish game hens and other meats for community activities; boiled thousands of eggs for the annual Lehi City Easter Egg Hunt; and often donated various baked goods to different organizations.

They worked in the hamburger stand during Lehi Round-Up, built many floats for the city parades, supported many local sporting events and were active members of the Lehi High School Booster Club.

During the Korean War, Arden served in France as a camp cook. He organized his kitchen much the way his mother, who had 10 children, did hers. Upon returning from the military, Cheryle and Arden met at a single adult activity for the Church of Jesus Christ of Latter-day Saints and married in the LDS Salt Lake City Temple on Nov. 17, 1955.

In 1967, the family moved to Lehi to open their own bakery, where they could control when they were open. At the time, all of their seven children were under the age of 10, and they wanted to attend church with them. Thus, the Lehi Bakery was born.

Born in 1931, Arden Francis Tuckett was the son of Jesse and Verda Margaret (Francis) Tuckett. The third of ten children, he grew up on a small farm in Lake Shore. He served an LDS mission to the Southwest Indian Mission, where he learned to speak Navajo.

Arden was a scout master, bishop and served on the high council. He participated in roadshows, famously performing in at least one skit each year. He was known for his delicious mashed potatoes and gravy, rice pudding, hamburger gravy and most especially, milk can dinners. This meal layered from bottom to top potatoes, ham, cabbage, corn on the cob, carrots, onions and kielbasa sausage. It was then cooked over a flame and poured into a trough-looking container to serve. Everyone loved it.

Later in life, the LDS Church asked Arden to run the church-owned Granite Bakery. Then when the Church built Welfare Square, Arden made thousands of loaves of bread each day for the Bishop’s Storehouses.

A twin and fifth child, Cheryle was born in 1937 to Rulon and Marie Widdison. She grew up in Payson, where she enjoyed camping, hiking, and all sports with her favorites being baseball and softball. In high school, she sang, played the clarinet and French horn and was in the marching band.

The couple traveled many miles to watch their kids play sports, which wasn’t always easy with a business to run. One year, Cheryle coached a Little League team made up of the children who were chosen last. After teaching them how to play baseball, the team won all of Lehi and went on to compete at regionals.

Arden and Cheryle are the parents of Brent (Valerie), Laurie Smith, Bruce (Erin), Joan, Mark (Stefanie), Margaret (Derrell) Shawcroft and Kevin (Janel). They have 33 grandchildren, 37 great-grandchildren and many others who claim them as grandparents.