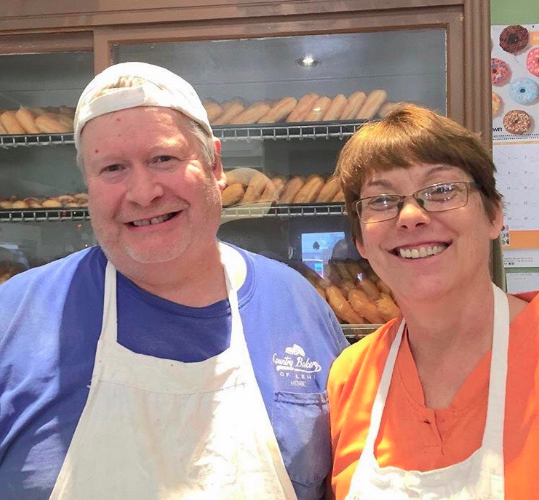 From raspberry rolls to square donuts to fruit pies to maple bars, almost everyone has a favorite. For decades, Lehi Bakery items have made Christmases, dances, ballgames and Saturday morning breakfasts delicious and special. The traditions of many Lehi families include baked goods found only at the bakery.

Fortunately, the Tucketts also chose to use their products to better the community by donating yummy confections to area schools, churches, communities and many other great causes. They even donated donut grease to bear hunters.

It wasn’t always easy. They went from being on the “wrong side of the street” to worrying about sales when Krispy Kreme came to Utah. But through it all, they always had a line out the door on Saturday, and they were always thankful for the consistent loyalty of so many customers.

The son of Arden and Cheryle Tuckett, the original owners of the bakery, Brent grew up in the bakery. He and his brother, Bruce, first learned how to fry and glaze donuts. Later, they washed dishes and cleaned up before finally getting to mix, roll out and form the doughs.

Brent, along with some brothers, took over the bakery in the fall of 1980 so their father could go to work to build a retirement. A few years later, Brent and Valerie purchased the store.

Valerie did payroll, bookwork and shopping, paid the bills, worked the front and holidays, filled in as needed and dealt with employees. Later, she rolled doughs and dressed donuts among other things. She became the cake decorator by default when Cheryle and Arden left on a mission, but she refused to fry donuts and never mixed doughs.

Leaving mixing to the professional, Brent mixed doughs, planned amounts, ordered supplies and ran, or oversaw, the proof box and oven. He was the one with speed and knowledge.

All of their children worked, and basically lived, at the bakery. “Our youngest would cry when I’d pull up to the bakery before Kindergarten,” said Valerie. “He would say, ‘Not the bakery!’”

When their children were small, they worked to earn money for a big family trip to Disneyland. Over the years, they learned how to work hard and run the family business. Some worked the 5 a.m. shift, where they got to spend time with their dad and see a new side of him. Most were able to jump in and help roll buns, make pies, make donuts and clean.

Holidays were the best of times and the worst of times. The family made memories working early mornings and long hours. They saw many miracles every holiday season. Friends chipped in to help, making the impossible possible, as the orders mounted. They always felt gratitude for the many hands that contributed to those miracles.

In December of 2018, the Tucketts sold the bakery.

Brent and Valerie met at Ricks College in Rexburg, Ida., on a blind date and were married Feb. 8, 1980, in the LDS Manti Temple. They have five children, Justin (Eva), Traci (Rick) Hall, Natalie, Crystalyn, and Staesha, and five grandchildren.

Valerie is the daughter of Earl and Sadie Hatch of Richfield. She is the third of seven children.