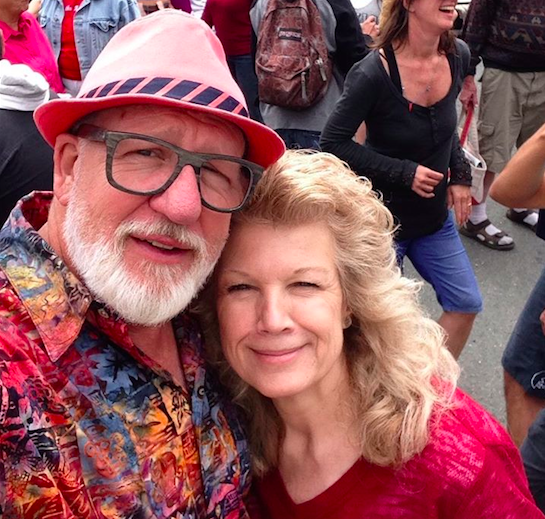 Randy and Nancy Blackburn, have been involved in our community in a plethora of ways. Nancy taught at Sego Lily Elementary for 34 years, enriching the lives of hundreds, while Randy has been president of the American Fork Art Board, taught community education art classes, volunteered at the American Fork Hospital emergency room and builds the notoriously fabulous sets of the Lehi High School Drama Department.

Whether you know it or not, if you live in or around Lehi, it is likely you’ve been affected by the lives of Randy and/or Nancy Blackburn.

Randy, probably best known at this moment for the beautiful sets he creates for the Lehi High School Drama Department, has done a wide range of things for the betterment of our community.

Around 2010, Randy got involved at the high school when his son, Adam, volunteered him to help with the sets. Soon, Randy found himself in charge and has been ever since. “It worked out quite well,” said Nancy. Although she retired soon after Randy got involved, she said, she’s happy for him. “My job is to free him up so he can do that.”

Randy was the president of the American Fork Art Board for more than 10 years; he taught community education watercolor classes every Tuesday night for many years; and he volunteered at the American Fork Hospital emergency room every Monday night for some 15 years giving blessings, sitting with the distraught, and entertaining children with his box of puppets.

The list goes on. Around 1995, Randy was hired by Thanksgiving Point. He was the first person to design the structure of the flower beds and gardens. He worked with a crew and loved it. The Blackburn children, Hope and Adam, loved it too as they often got to go with their father to do chores and feed the animals.

After that, another door opened, and Randy was asked to paint the giant murals that can be found at the Polynesian Cultural Center of the Church of Jesus Christ of Latter-day Saints on Oahu, Hawaii. Randy flew to Hawaii a couple of times a year to work for three to six weeks at a time. “That’s where he learned to love painting things that are huge,” said Nancy. “He thinks that’s fun getting in the lift.” Once again, their children loved it, as well as Nancy, as everyone got to go at least once during this time.

The Blackburns also worked together on the Pageant of the Arts in American Fork for many years. The pageant presented art masterpieces live, on stage with people as well as an adult and child art show.

Born in 1955 in Pasadena, TX, to Frank and Carol Richards Nicholes, Nancy came to her family while her father was serving in the U.S. Air Force. She is the second of five sisters and spent most of her childhood in Utah County. She and Randy graduated from AFHS in 1973.

After graduating from Brigham Young University, Nancy was offered a teaching position at Sego Lily Elementary. When she retired in 2012, she was the only person who had ever spent their entire career at the school.

Randy is the son of Wyler and Creta Lindquist Blackburn of Goshen and Price, respectively. He has one sister. Wyler was in the American Fork National Guard and was always volunteering in the community. He often took Randy along with him, developing a lifelong love of service in his son. When Randy was 10, he began taking evening community art classes, often with little old ladies, fostering another lifelong love.