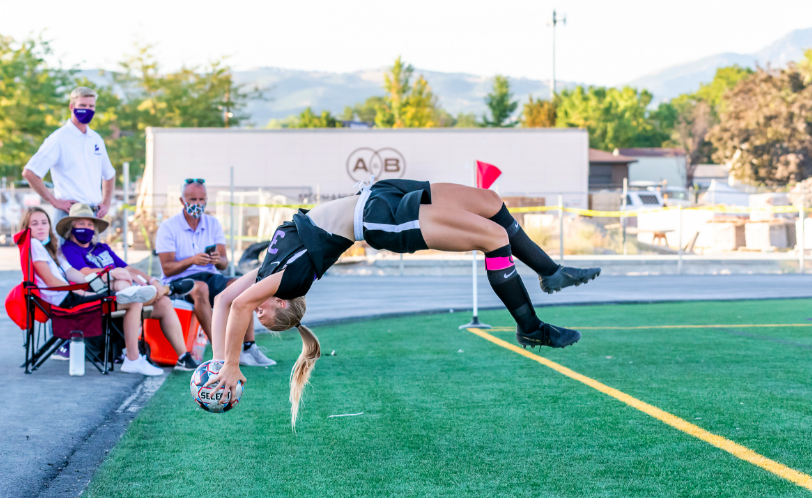 Lehi dominated possession during the first half against the Aviators, with quality chances to score coming early and often.

Lehi’s first goal came in the 20th minute. Midfielder Ally Dahl played a long ball through to sophomore forward Stephanie Roper. The Cedar Valley keeper came out to challenge, but Roper shot the ball past her from the top of the box.

Lehi’s second and final goal of the match came just four minutes later. Midfielder Erin Dahl one-touched an Aviator goal kick to forward Kennedi Schmidt, who maneuvered the ball between two defenders and then beat the charging goalie from 18 yards out with a finesse shot.

The Lehi defense was strong throughout the game, earning themselves and sophomore goalkeeper Hayley Ogden a second shutout in a row.

“We were very good in the middle third. Our midfield really dominated the game. We defended very well,” said Coach Tim Graham.

Next, Lehi faced Pine View in a Saturday morning contest. The Pioneers out-possessed and out-shot the visiting team in the first half of the game. However, they did not find the back of the net until the final minute of the half.

Roper dribbled the ball down the right side of the field, cut toward the middle and beat the keeper for her third goal of the season.

The Panthers evened the score 10 minutes into the second half. Lehi regained the lead 2-1 seven minutes later when Schmidt scored her third goal of the year off an Ally Dahl corner kick.

The advantage lasted one minute. The referee called a hand ball in the box on a Lehi defender and awarded Pine View a penalty kick.

Although Ogden made a diving save on the ground to her right and blocked another shot from the rebound, Lehi was unable to clear the ball from the front of the goal and the Panthers tied the game again.

The deadlock remained at the end of regulation, so the match went into a golden-goal overtime.

Pine View scored on a header in the final 10 seconds of the first overtime period to secure the victory.

“We need to come more prepared and ready to play,” Graham said. “We as a coaching staff need to really help prepare the girls. We failed in doing this prior to this match… Pine View took advantage of it and outworked us in the second half, especially.”

“We need to finish our chances,” he added. “Lastly, we were super unorganized defensively and it killed us in this game.”