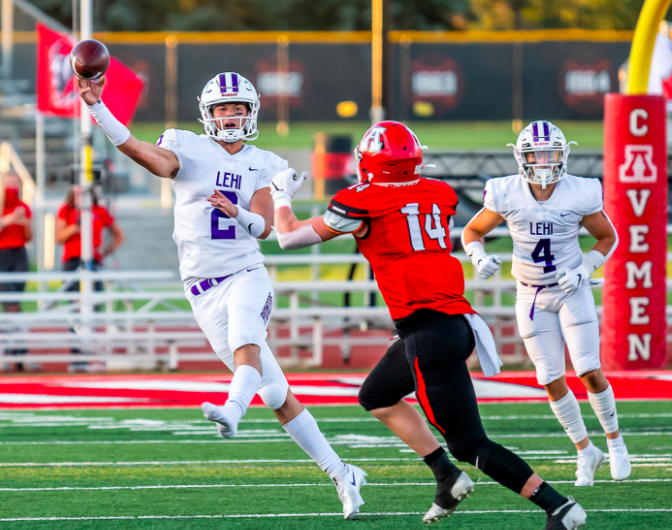 The Lehi High School football team gave up two quick touchdowns to start the season opener at American Fork and the game went downhill from there as the Cavemen rolled to a 55-0 victory.

The Pioneers had a nice return on the opening kickoff but lost the ball at their own 22 and American Fork quickly capitalized, scoring at the 10:28 mark of the first quarter.

After a touchback, the Lehi offense was unable to get a first down and the Cavemen got another short field, scoring again with 5:01 left in the first quarter.

And so it went. The Pioneers gave up four more touchdowns before the half, two after being unable to gain any ground offensively and two after turnovers, making it 41-0 at the break.

To their credit, the Lehi players recovered some composure and played better in the second half. American Fork only scored twice more and the Pioneers were able to move the ball a little bit, though they never threatened.

“I just told the players after the game that this was on me,” said Lehi head coach Ed Larson. “It’s my job to prepare them and we obviously didn’t do as much as we should have.”

Noting that he has a lot of first-time varsity players, the coach added, “We just challenged them this week to recognize that this is a different level; they’re not on the JV or sophomore team anymore.

“I also have to say hat’s off to American Fork; they played well and they executed well.”

Despite the lopsided score, there were some bright spots for the visitors, especially on the defensive side.

“I thought Alex Long had a pretty good debut as a defensive tackle,” Larson said. “I think Bode Hinckley and Holden Hughes, our corners, played well enough to win.

“Christian Wren flew to the ball and made his presence felt,” the coach continued. “He made a few mistakes, but we expected that for his first time in a new position. His effort was certainly what we anticipated it would be.

“Our defense is a lot closer than our offense to where we need to be,” Larson said. “We did make some coverage mistakes and missed a few gap controls, but overall it was a solid performance. When the other team’s average starting position is our 27, it makes things tough.”

The coach was also pleased with how his new players did up front. “Our offensive line protected better than I thought they would,” he said. “We had a few breakdowns in pass protection here and there but overall, they did a good job.

“I think they will do well when we get other parts of the game in balance,” Larson added. “There were definitely some life lessons learned all the way around. We’ll build off of this and come back a little better.”

Skyridge football looks to be competitive once again