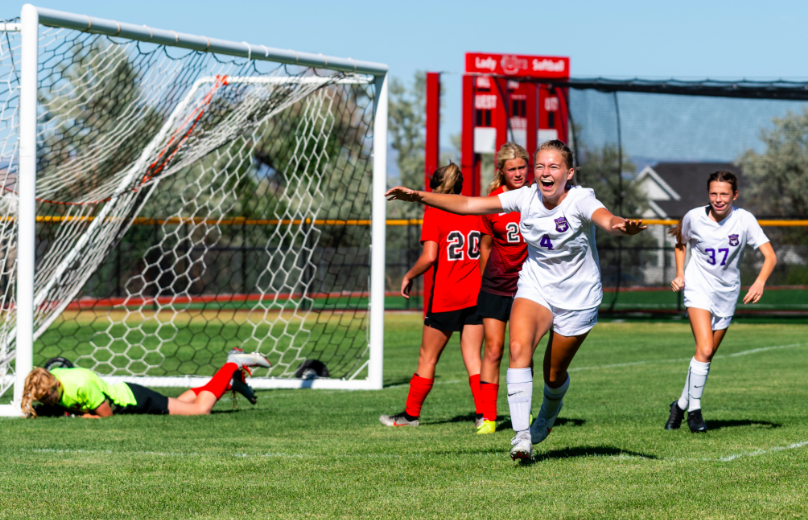 The Lehi girls soccer team earned mixed results in its opening week of play, dropping a home contest to Viewmont 3-1 on Aug. 5 but rebounding for a 5-0 victory at Uintah on Aug. 7.

During a hard-fought first half against the Vikings, both teams moved the ball up and down the field and had chances to score. Viewmont put the ball in the net with five minutes remaining in the half.

In the second period, the Pioneers were reminded that soccer is an unforgiving game. Before the hand sanitizer applied by the players as they took the field at the start of the half was dry, the Vikings had scored two goals. Lehi was down 3-0 with 37 minutes remaining.

“We played too many balls in the air, which forced us to defend for much of the game. Between this and not defending well on set pieces, we really put ourselves in a tough spot,” said Pioneer coach Tim Graham.

In spite of being in a deep hole, the Pioneers maintained composure and continued to compete. With about three minutes remaining, junior midfielder Ally Dahl scored on a powerful shot from 12 yards out.

Sophomore forward Stephanie Roper helped set up the goal. After dribbling the ball down the right sideline, her shot was deflected by the keeper and was rolling around the middle of the box when Dahl sent it into the back of the net.

Against the Utes, the Pioneers controlled all phases of the game from the opening whistle. After repeatedly testing the Uintah goalkeeper in the first half, Lehi got on the board in the 13th minute when senior forward Haley Martin scored with a left-footed shot from the top of the box.

“In the first half, we just needed to relax and stop rushing things in the final third. We were shooting balls right at their goalkeeper,” Graham said.

In the second half, Lehi continued pressuring the Uintah defense, getting plenty of shots on goal and scoring four times. Roper got the scoring party started in the second minute after the break on a cross from senior forward Kennedi Schmidt.

Next, junior defender Savannah Jones beat the keeper by redirecting a corner kick with her left foot inside the near post.

Schmidt carried the ball down the center of the field to score from the top of the box after running onto a ball volleyed into space by freshman midfielder Erin Dahl.

The final goal came when sophomore midfielder Reagan Jorgensen took advantage of the Ute defense’s failed attempt to clear the ball out of the box by blasting a one-touch shot into the net.

While acknowledging the impressive offensive output of his team, Graham was quick to recognize Lehi’s outstanding defensive effort in earning the shutout. “The whole team defended very well and our press was very effective.

“The one thing that our back line did that helped us a ton was they were able to keep the ball on the ground and build from the back. By doing this it kept us from having to defend,” he said.

“We had the ball for most of the game and our back line did a fantastic job of making sure we played our game by keeping possession and building from the back,” the coach concluded.

The Pioneers defeated Cedar Valley 2-0 on Aug. 10. Look for details of that contest in the next issue.