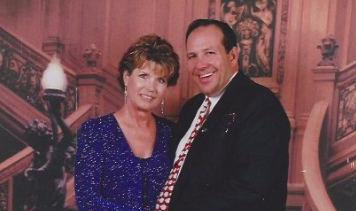 Layne and Diane S. Downs love Lehi and serve in a myriad of ways

For more than eight years while their children were in school, Layne and Diane served on the Lehi Booster Club. They worked in concession stands, made breakfast for the wrestling team and took tickets for activities. They were true purple Pioneer fans who supported every school activity.

Diane served many years in the PTA, including a term as Legislative VP for the Utah PTA. She volunteered in the schools and subbed when she could. Layne also enjoyed subbing for the Lehi High School FFA with the agricultural and shop classes.

The son of LaVere and Virginia Tripp Downs, Layne was born and raised in Lehi. He has always been part of the LHS rodeo program as his dad was one of the original organizers. As a youth, Layne competed in high school bull riding and some steer wrestling. After high school, he competed professionally for a few years. Over the years, he and Diane have spent countless hours assisting LaVere with ticketing, gates and so forth at high school rodeo events. For more than 20 years, Layne and his father took tickets and helped with the Utah High School Rodeo Finals in Heber.

The daughter of Lloyd and Emily Ennis Stone, Diane was born and raised in Draper and is a former Miss Draper. She and Layne met at a rodeo in Evanston, Wyoming, where Layne was a participant and Diane was a spectator. The couple married in 1975 in the Salt Lake Temple of The Church of Jesus Christ of Latter-day Saints.

Layne has been part of the Lehi Civic Improvement Association, working on the Rodeo Committee for more than 20 years. He and Diane enjoy taking their children and grandchildren to all of the rodeo celebration events. Some of their fondest Round-Up memories include the horse parade, hearing the cannon blasts signaling it’s time to go to breakfast, being part of the parade, and now watching it and all of the activities in the park. Both Layne and Diane served on the Round-Up Week parade committee for more than 10 years.

Collecting old cars is one of Layne’s great loves. For several years now, he has happily offered classic cars to Lehi Heritage Day honorees to ride in during the Showcase Parade. He enjoys driving the nominees as well as displaying historic American flags that his father and son, Cody, have collected over the years.

Both Layne and Diane own/owned local businesses. Layne works as a water broker while Diane operated a Copyrama in American Fork and Lindon until she sold them in the late 1990s. Diane served as the president of the American Fork Chamber of Commerce.

Layne and Diane have served in a variety of callings in their church community. Both in their ward and stake, they have served in leadership positions in the scouting program as well as in the Young Men, Young Women and Primary organizations. They have planned fundraisers to help their local wards and parties where they fed hundreds. They have also enjoyed taking the youth of their stakes and others on spiritual growth trips where they’ve been river running inside and out of Utah.

The Downs have six children, Lee, Brad and Cory Adamson-Downs and Cristal, Cody and Nicole Downs. They have 18 grandchildren and three great-grandchildren. The couple has lived in Lehi for the last 44 years.

Layne and Diane Downs have served our community tirelessly.  The Lehi Historical Society and Archives and Lehi City thanks them for their much-appreciated service.

A Pioneer tribute to Alyssa Eav, the girl who changed Lehi High