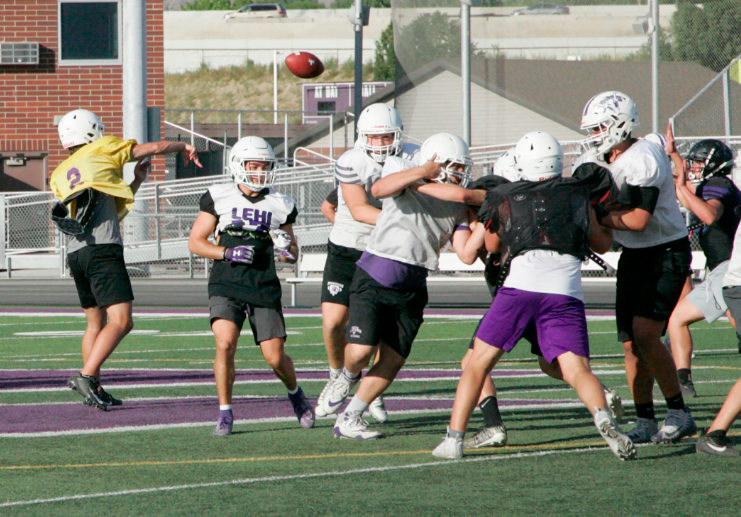 The Lehi High School football team returns a solid core group from last year’s state semifinalist squad and expects to be competitive again in tough Region 7 as well as at the state level.

Despite the virus-induced disruptions to the normal off-season schedule, coach Ed Larson thinks his players are prepared.

“Obviously this situation has affected everyone, but I think my players are ready to get after it,” he said. “It’s not good for us to be cooped up. When they first came out at the end of May it took a couple of weeks to get their heads out of the fog, but they’re back to enjoying being kids again.

“Now, I barely hear them talk about the virus at all,” he said. “They’re just going about their business.”

The coach and his staff have tried to keep things as normal as possible within the parameters made necessary under current circumstances.

“We’ve abided by the guidelines six weeks and went to Snow College for team camp and we’ve had zero breakouts,” he said. “We hope that trend stays the same, but there are protocols in place if anything happens.

“Nobody knows the future, but I think we’re going to be fine if everyone uses common sense and is considerate of others,” Larson added. “We can make it through this.”

Alpine School District officials are still working on guidelines for spectators, but those are expected to be released prior to next week’s opening-night endowment games.

The building blocks for any team with high aspirations have to start with the defense.

Returning senior leading tackler Christian Wren has been moved to interior linebacker and the coach expects him to be a physical presence and emotional leader at that spot. Senior Brock Love has earned his first varsity start at outside linebacker.

A California move-in, senior Holden Hughes, “has stepped up and taken over the leading corner spot,” Larson said.  “Senior Bode Hinckley is in the lead for the other corner spot.

“Senior Izak Harward will be our safety leader on the back end and sophomore Kadiyon Sweat played a lot at safety last year as a freshman.”

“Our offensive line is really young,” the coach continued. “Our returning starter, senior Ethan Somerville, is moving to left tackle and everyone else is battling for a starting spot.

“Junior Teague Andersen is one of several options there, and with sophomore Austin McWilliams as our starting center, we should be much better than last year up front,” Larson said.

That corps will have the duty of protecting returning starting quarterback Creyton Cooper. The senior was responsible for 40 touchdowns last season and the coach said, “He’s throwing it gangbusters, so we’re excited.”

Returning seniors Peyton Dieters and Chandler Jenkins plus California move-in Takeshi Faupula will all get time at running back.

Larson said, “We’re going to have a 3-headed monster at tight end in the mold of some of our past greats. Senior Josiah Westover will lead that group.”

The returning slot receiver is senior Isaiah Tauai. “He was having a great year last year until he broke his collarbone,” the coach said. “He’s now back at full strength and ready to go.”

The outside receivers are all brand new. Junior Jaxon Christensen will share time with seniors Grady Gonzalez and Payton Faris.

Borrowed from the soccer team, seniors Carson Webber and Rhett Anderson will fill the kicking duties.

“We take our season goals in three pieces,” Larson said. “We aim to win our preseason, then our conference games, and finally go to the playoffs.”

The Pioneers have three 6A games with Riverton, Pleasant Grove and American Fork in one of the toughest preseason schedules in the classification. “Those will set the table for what kind of season we’ll have,” the coach said.

“In the region, everybody in the state is talking about Timpview,” he continued. “Our toughest stretch will be Timpview, Alta and Orem in a row right before the playoffs. We beat each other up but we’re hoping that will prepare us for the tournament.

“We’ve developed a program now. Our kids believe we belong at that level and can compete with those guys, so we’re pretty confident,” the coach concluded.