Garden helps community get back to its roots 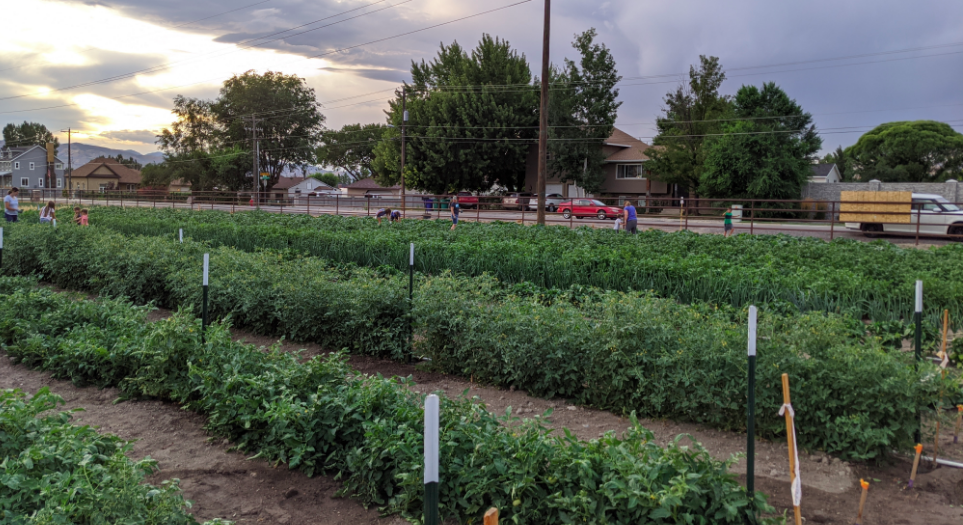 When The Church of Jesus Christ of Latter-day Saints canceled Sunday meetings to comply with COVID-19 restrictions on large gatherings and slow the spread of the virus, it left many ward families wondering how to support and sustain each other. Three wards in Lehi are starting to reap the fruit of their labor of love on 300 North near Veterans Park.

“The garden idea came about when a few friends tried to answer the question, ‘What can we do right now to help keep our community together and prepare for the future?’” explained Matt Hansen, Elders Quorum President in the Westfield First Ward in Lehi. Bishop John Lewis asked his father, Stan Lewis, for the use of almost an acre of good farmland near the road where people could watch the garden grow. Stan and Angie Lewis had already planted grain on the plot, but they happily dug it up for the community garden. John Lewis invited two other wards in the area to help and soon the project was underway

“It would only amount to a few bales of hay for us, but it was a lot more to them,” said Angie Lewis.

Things fell into place as people from each of the three Lehi wards (Westfield First Ward, Westfield Second Ward, and Veterans Park Ward) offered their gardening expertise. Diana Smith began making weekly YouTube videos to go with assignments in the garden. “I’d demonstrate how to plant, weed, fertilize – all while social distancing. I learned so much through the process, valuable information about gardening. I didn’t know potatoes and tomatoes shouldn’t be planted together before this,” said Smith.

Melanie Aird and Cindy Aston have created an online sign-up sheet for families to take shifts working in the garden. Handwritten signs indicating where to start weeding are in located the garden, as well as stakes identifying the plants in each pristine row. Hansen and others studied Utah State University’s Extension website for tips on planting and irrigation.

“The irrigation is designed off a basic home sprinkler system with a clock and valves. Each row has PVC pipe running down it with a pre-determined number of holes drilled to allow water to be delivered to the plants. The effort and work that went into the irrigation and other basic systems made it simple for individuals and families to participate in the most exciting parts of the garden,” Hansen explained.

Between 150 and 200 people have happily dirtied their hands in the church garden over the last few months. “The goal was to teach self-reliance, learn new skills, and work on something together. The Lord really is in the details. I had no idea the garden would be this cool,” said John Lewis.

“We’ve seen families weeding early in the morning and they’re starting to harvest the tender crops. It’s been fun to watch everything grow, and the community come together. We didn’t even get to build mini floats this year. The by-product of working on something together is the relationships that are formed,” said Stan Lewis.

“When we started this, we knew it would be something good and it would benefit the community. We’ve been surprised, though, at all the unintended positive outcomes. The Garden has brought a small community of great people together again in a responsible way where politics, protests, and viruses aren’t the topic of conversation. Instead, discussions are centered around the basics of helping those in need, strengthening family, building new friendships, and keeping God involved in our daily lives,” said Matt Hansen.